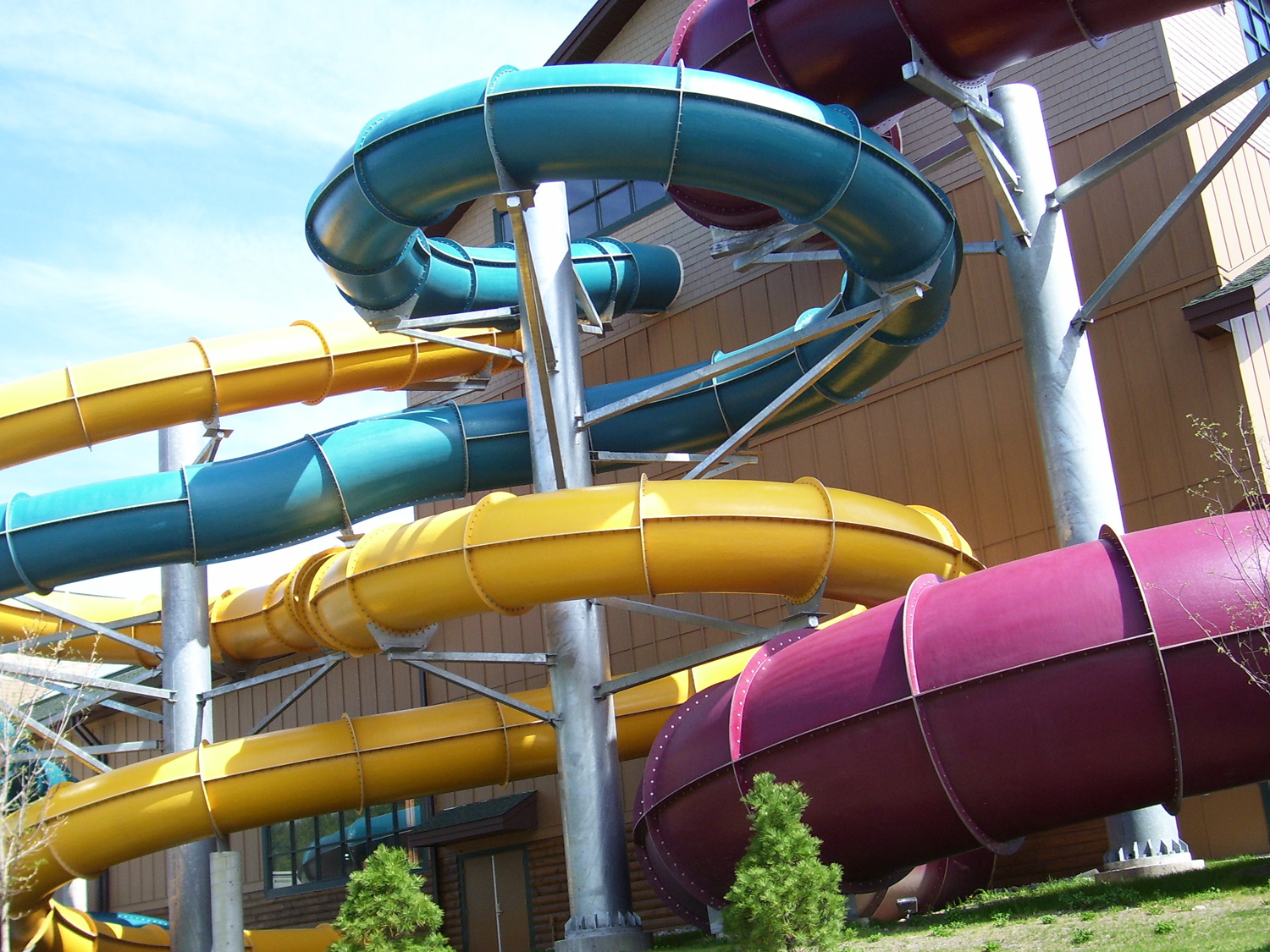 The World Waterpark Association estimated approximately 82.5 million attendees at North American waterparks during 2013, which compared to 85 million in 2012 and 82 million in 2011. The decline in 2013 is attributed to consistently poor weather through much of the United States in the first six weeks of the season. This estimate includes attendance at all municipal and private indoor and outdoor waterpark facilities in North America.

An outdoor waterpark is an outdoor aquatic facility with three or more water slides. It often also includes other water elements requiring lifeguards such as lazy rivers, surf simulators, or wave pools. These parks will often offer additional splash features for younger children.

The number of U.S. waterparks reached 834 by March 2014, with the majority being outdoor waterparks (most of which are municipal). This is an increase from our April 2013 industry overview of waterparks, which indicated there were 796 waterparks in the United States. 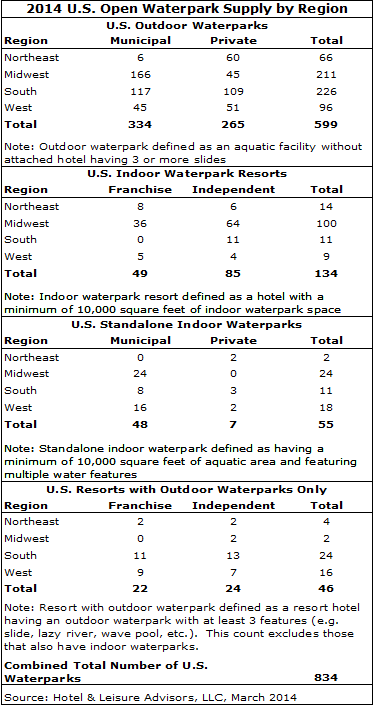 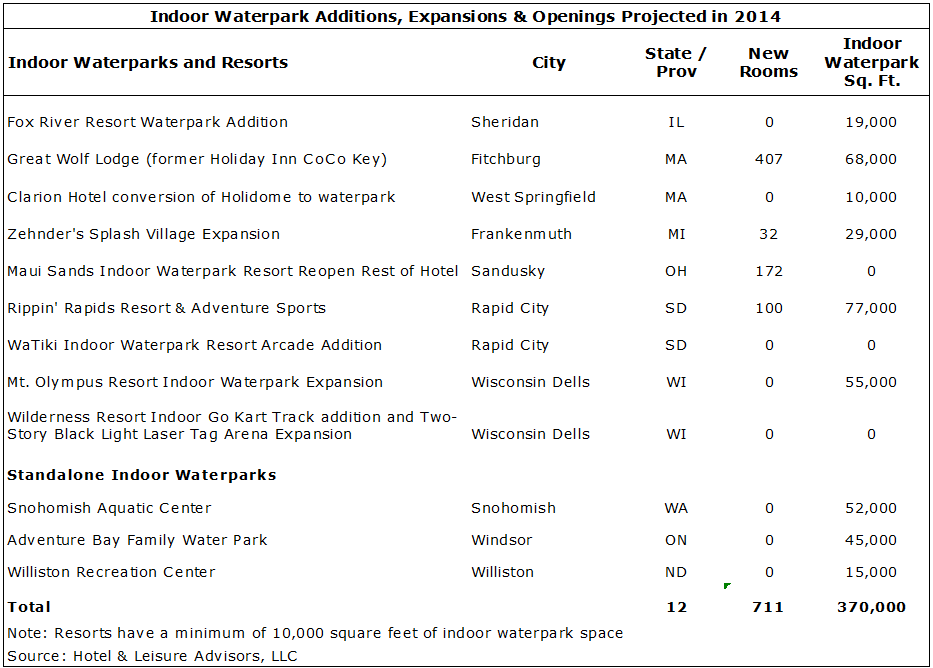 Following a closure and extensive renovation, the Great Wolf Lodge in Fitchburg, Massachusetts, will increase the number of hotel rooms at the former Holiday Inn from 245 to 407 and double the former CoCo Key waterpark in size to 68,000 square feet. The facility will also feature several dining options and more than 12,000 square feet of conference space.

Other significant projects include the Mt. Olympus Resort indoor waterpark expansion with 55,000 additional square feet and the new Snohomish Aquatic Center with 52,000 square feet. These larger projects are significant for 2014 growth as their sizes are larger than anything developed or expanded in 2013. 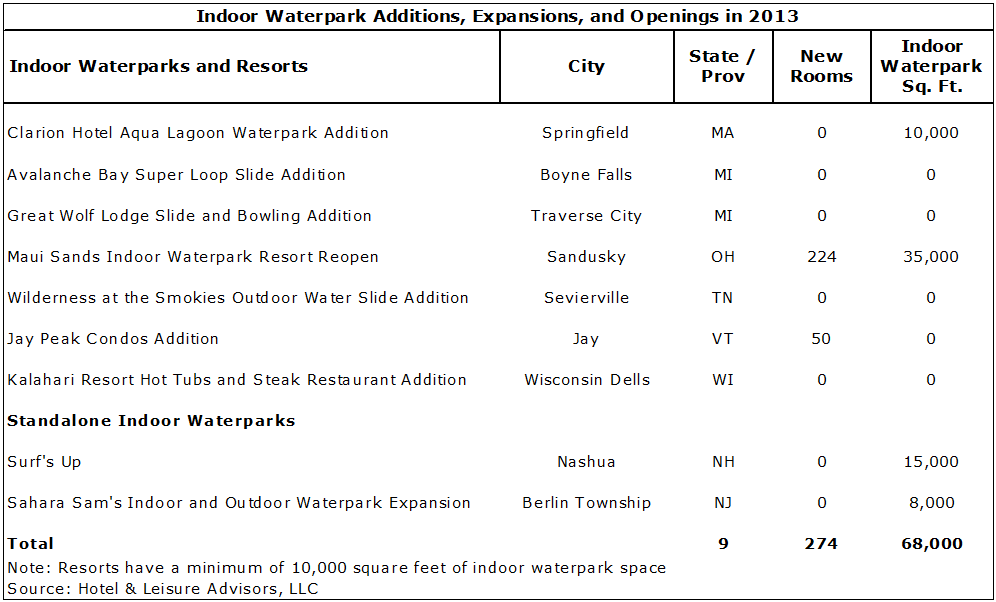 The largest indoor waterpark project last year was the reopening of Maui Sands in Sandusky, Ohio. It opened 224 rooms and 35,000 square feet of waterpark space in 2013. This year it is due to open the remaining 172 hotel rooms. In 2015, two major indoor waterpark destination resorts are due to open in the Poconos: the 453-room Camelback Resort and the 457-room Kalahari Resort, adding 220,000 square feet collectively.

Outdoor Waterparks: The U.S. supply of waterparks is dominated by outdoor waterparks. In 2014, another 15 are projected to open. 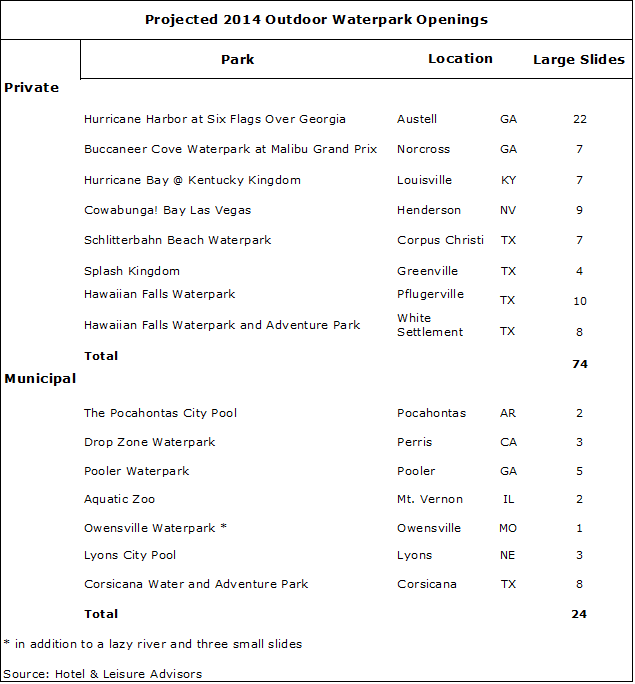 In all, 98 new large slides at outdoor waterparks are slated to open in 2014. Smaller slides are often not announced prior to opening but contribute to a larger number of total slides reported by year-end. 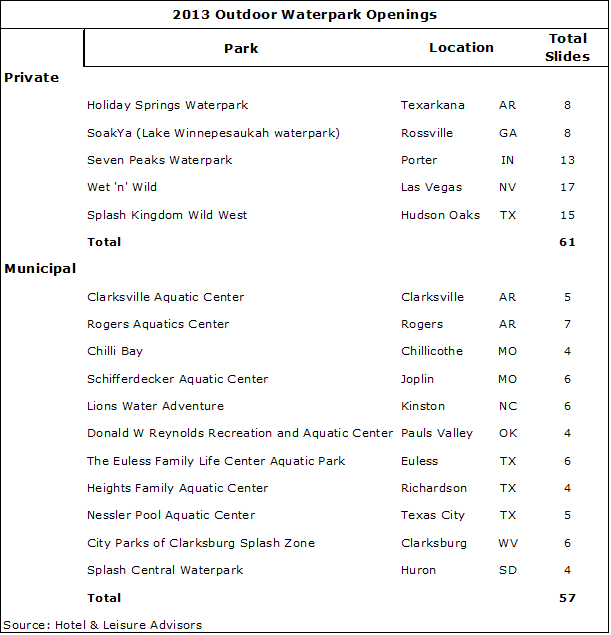 Resorts with Outdoor Waterparks: Outdoor waterparks can enhance a hotel’s amenities and attract additional guests. They may be the deciding factor when it comes to family lodging options. Three resorts with outdoor waterparks are slated to open or expand in 2014.

Legoland California opened as an amusement park in 1999, added a waterpark in 2010, and added a hotel in 2013. In 2014 it will expand its waterpark with a theme from its latest product line, Legends of Chima, where animal tribes battle in a fictional land for control of the energy source. The park will center on an interactive wave pool. There will also be a hands-on water play area with slides, cannons and water jets, and a build-a-boat area.

Conclusion: The waterpark industry is showing real growth not only in the number of openings but also in the sizes, number of slides, and types of amenities. In 2014, we are finally beginning to see new project numbers that reflect those prior to 2009. The continued desire for fun, safe, family activities with a bit of adventure is reflected in the increasing demand for waterparks. More families are planning weekend getaways with their children’s desires in mind. Indoor waterpark destination resorts provide fun weekend and vacation getaways for families while outdoor waterparks typically attract more day guests from the surrounding area.

Although outdoor waterparks are less expensive to build, they are weather dependent and poor weather during the summer season can negatively impact financial results. Successful indoor waterpark resorts can yield much higher profits. However, not all ventures are successful, and funding is still challenging to obtain. Lack of funding is the main reason many proposed projects never see the light of day. Many factors contribute to a project’s success, and proper feasibility and economic impact studies, and planning are a must for any waterpark development. The development of an indoor or outdoor waterpark requires extensive research of supply and demand factors, demographics, income and expense levels, potential per capita spending, potential attendance, and profitability levels.

David J. Sangree, MAI, CPA, ISHC, is President of Hotel & Leisure Advisors, a national hospitality consulting firm. Mr. Sangree’s expertise is in the appraisal and analysis of hotels, resorts, indoor waterpark resorts, outdoor waterparks, amusement parks, conference centers, ski resorts, and golf courses. He has performed studies on more than 2,000 existing and proposed hotels in more than 46 states and internationally in all price ranges, including economy, full-service, extended-stay, and luxury hotels and resorts including indoor waterpark resorts. He has been an active appraiser/consultant since 1987 and also has 10 years of work experience in the hotel/restaurant industry, including management positions with four Westin Hotels properties.

Mr. Sangree is a nationally recognized expert on waterpark resorts and has visited most of the open waterpark resort properties in the United States and Canada. He has completed more than 400 studies of waterparks resorts since 1999. Mr. Sangree was named one of Aquatics International Magazine’s “Power 25”. In its profile, Aquatics International named Mr. Sangree as one of the first consultants serving the waterpark resort industry and credited him with shaping some of the latest industry trends through his expertise and experience in the waterpark resort market. Mr. Sangree has appeared on Good Morning America and CNBC on special reports concerning resorts and waterparks. He can be reached via telephone at 216-228-7000 ext. 20 or via e-mail at dsangree@hladvisors.com. The author wishes to acknowledge Hollie Gibbs for her assistance with the article.