The waterpark industry continues to expand in North America, with more than $550 million worth of new investment in indoor and outdoor waterparks and their related resorts in 2016. Waterpark related development is expected to grow in 2017, with over 40 expansions and new facilities opening. 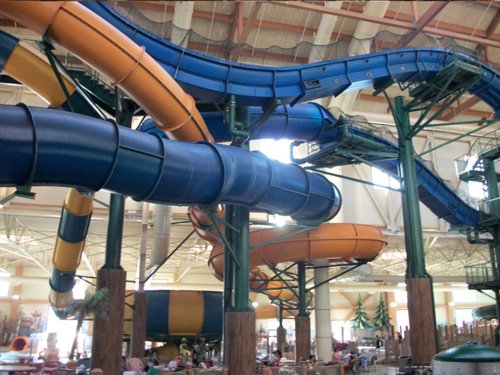 Two of this year’s most anticipated additions are Universal Orlando Volcano Bay in Orlando, Florida, and the Kalahari Resort phase two expansion in Pocono Manor, Pennsylvania. The 30-acre Volcano Bay waterpark will feature 18 state-of-the-art attractions and is poised to set a new standard in the outdoor waterpark market. Kalahari Resort expanded in March 2017 to nearly 1,000 guestrooms and a 220,000 square foot indoor waterpark. It is one of the largest indoor waterpark resorts in North America.

As of February 2017, the United States has 1,029 waterparks, an increase of 34 waterparks over last year’s reported 996. The majority of this gain was in the outdoor segment and was split between private and municipal facilities. Twenty-four properties opened in 2016, while H&LA found ten additional properties through our monitoring the ever-evolving national waterpark market, discovering waterparks that have not previously been listed in databases. 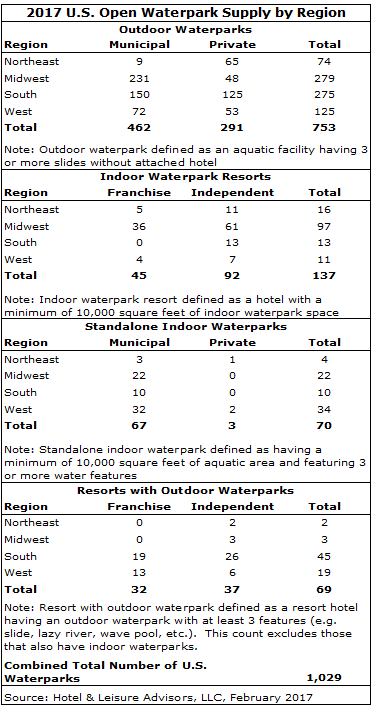 Waterpark Additions: In 2016, 11 indoor waterpark resorts introduced 368,000 square feet of indoor waterpark space and more than 1,200 guestrooms to North America. Although this is a significant increase over 2015’s 243,000 square feet, it falls short of the gains achieved during the 2005-2009 era of record expansion prior to the recession. 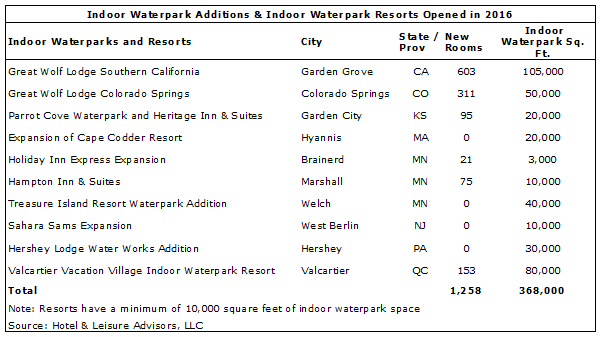 The two largest additions account for more than half of this growth. One of three new Great Wolf Lodge resorts, the 603-room Great Wolf Lodge Southern California in Garden Grove, California, boasts a 105,000 square foot waterpark. It opened in early 2016 near Disneyland and has achieved strong performance to date. The 311-room Great Wolf Lodge Colorado Springs opened in late December 2016 and was a renovation and expansion of an unfinished hotel on the north side of Colorado Springs. The 153-room Valcartier Vacation Village Indoor Waterpark Resort in Valcartier, Quebec, includes an 80,000 square foot waterpark. The resort also includes the 44-room Hotel de Glace, North America’s only ice hotel, an outdoor waterpark, and a campground resort. 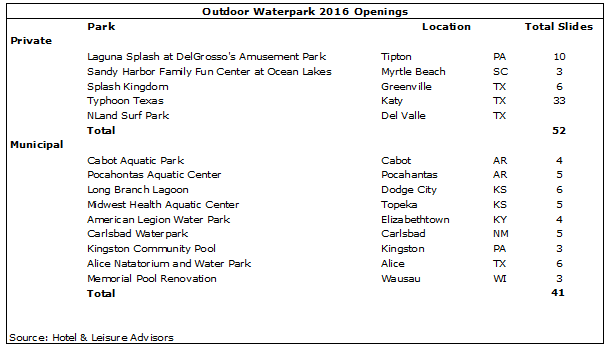 Fourteen new outdoor waterparks opened in 2016. Most were municipal facilities and the South was the largest regional contributor. Typhoon Texas in Katy was the largest new waterpark with 33 slides on 43 acres. Laguna Splash at DelGrosso’s Amusement Park in Tipton, Pennsylvania, is a notable addition with 10 slides. NLand Surf Park, though not an outdoor waterpark as it does not include any slides, is the largest surf park to open in the United States. While the largest new waterparks are privately owned, we see a trend toward the development of larger municipal facilities offering greater numbers of slides.

Acquisitions: In addition to opening several new resorts in the last year, Great Wolf Resorts Inc. is purchasing two established resorts in 2017. It purchased the 403-room Radisson Hotel and Water Park of America in Bloomington, Minnesota in early 2017. The facility closed in January for renovations and will reopen in November 2017 as a Great Wolf Lodge. In a deal announced in February 2017, Great Wolf Resorts Inc. acquired the 414-room Key Lime Cove Waterpark Resort in Gurnee, Illinois, with plans to renovate and rebrand the property.

In a deal announced in November 2016, EPR Properties purchased a portfolio of waterpark and amusement park properties from CNL Lifestyle Properties. The $700 million agreement included ski resorts, amusement parks, and 11 waterparks. Multiple brands were represented in the transfer, including Wet ‘n’ Wild locations in Spring, Texas; Glendale, Arizona; Kapolei, Hawaii; and Palm Springs, California; and the Hawaiian Falls Waterparks in The Colony and Garland, Texas.

The 337-room Fort Rapids Indoor Waterpark Resort in Columbus, Ohio, closed in early 2016. Nearly $40 million was spent to upgrade the hotel and to add the 45,000 square foot indoor waterpark in 2005. The future of the property is uncertain.
The 26,000 square foot CoCo Key Water Resort in Waterbury, Connecticut, closed in 2016 after just eight years of operation. The 282-room property sold at auction for $5.2 million, and the buyers demolished the structure with plans to redevelop the site.
The $22 million Alice Natatorium and Waterpark opened in July 2016 and closed in December 2016. The Alice, Texas, City Council voted unanimously to suspend operations citing that the facility was too expensive to operate.
Despite the ample growth opportunities in the waterpark market, these examples underscore that success cannot be achieved without proper management, financial planning, and capital reinvestment.

This year, we will see growth across all segments of the waterpark market. Of 40 anticipated waterpark additions, 29 represent new facilities and 11 represent expansions of existing facilities.

More significant growth is projected in outdoor waterparks, which make up nearly 80% of the U.S. supply. This year, 26 outdoor waterparks are slated to open, which is a significant increase over the 14 openings in 2016. Ten are privately owned, and the remaining 16 are municipal facilities.

Regionally, the South continues to drive growth across all market segments, followed at some distance by the Midwest. Nineteen of the 30 new facilities will be in the South including 11 in Texas, which is the greatest number for any state. Pennsylvania and North Carolina tie for second with three new waterparks each.

Universal Orlando Volcano Bay is under construction on the site of the former Wet ‘n’ Wild Orlando. This 30-acre waterpark will feature a multidirectional wave pool, raft rides, and body slides that drop from the top of the park’s signature 200-foot volcano. The Krakatau Aqua Coaster will feature ProSlide’s groundbreaking linear induction motor technology that relies on magnets to propel the coaster. The waterpark will include 18 major attractions, including waterpark thrill rides and activities for smaller children.

H2OBX Waterpark is under construction in lower Currituck County, North Carolina, near the Outer Banks. The park will include a large wave pool, lazy river, family raft ride, slides, FlowRider, and children’s area. It will have a maximum capacity of 5,000.

A smaller but growing segment is resorts with outdoor waterparks. Two resorts will add or expand outdoor waterparks in 2017. Open in 1994 with 138 guestrooms, Country Cascades in Pigeon Forge, Tennessee, broke ground on its new Summit Tower in July 2016, with a planned opening on Memorial Day weekend 2017. The expansion will add 98 guestrooms and a 30,000 square foot waterpark. The BSR Cable Park is a cabin resort in Waco, Texas. Current amenities include a cable park, a large slide structure, and a lazy river. It plans to debut the “Surf Ranch” addition in July. This two-acre surf lake will produce up to eight-foot waves and provide a venue for inland surfing competitions.

Waterpark resorts continue to show growth in the United States and Canada, with new resorts and attractions being added in various locations. Most waterpark resorts continue to achieve strong performance, although some smaller indoor waterpark resorts have achieved lower performance levels causing a few to close. Municipalities continue to add waterparks to their aquatic offerings particularly in southern states. A greater number of privately owned outdoor waterparks are projected to open in 2017, which typically offer a greater number of attractions than their municipal counterparts, although at higher admission prices. Families continue to show strong interest in waterpark attractions and are particularly interested in new facilities or additions of new rides to existing parks.

Mr. Sangree is a nationally recognized expert on waterpark resorts and performed more than 600 studies of indoor and outdoor waterparks since 1999, and he maintains databases of statistical information concerning performance figures of indoor waterpark resorts, resorts with outdoor waterparks, and stand-alone outdoor waterparks. Mr. Sangree was named one of Aquatics International Magazine’s “Power 25” in 2008 and received the Executive Board Award from the World Waterpark Association in 2016. Both awards profiled Mr. Sangree as one of the first consultants serving the waterpark resort industry and credited him with shaping some of the latest industry trends through his expertise and experience in the waterpark resort market. Mr. Sangree has appeared on Good Morning America and CNBC on special reports concerning resorts and waterparks and has written numerous articles for a wide range of publications. He can be reached via telephone at 216-810-5800 or via e-mail at dsangree@hladvisors.com. The author wishes to acknowledge Michael Weber for his assistance with the article.