Home > Publications > Cleveland a ‘city of choice’ for development

Cleveland is riding high as it enjoys an infusion of more than $17 billion in capital developments, including nearly $3 billion dedicated to tourism and more than 2,000 new hotel rooms between 2013 and 2016.

According to Positively Cleveland, the number of business and leisure visitors to the region increased by 4% in 2013 to 16.2 million, generating an economic impact of $7.4 billion. So often portrayed as a has-been Rust Belt city, Cleveland is not-so-quietly reinventing itself, pinning its future on a renewed convention business and innovative, cutting-edge industries with staying power.

Judging by these figures, LeBron James is not the only one choosing Cleveland these days.

Cleveland is enjoying a downtown resurgence as new development projects such as the Horseshoe Casino, Cleveland Convention Center, Ernst & Young Tower and Global Center for Health Innovation recently have changed the city’s landscape and increased visitation.

Over the past several years, the greater Cleveland area has seen a number of major projects in the health care sector, amounting to an estimated $3 billion in health care construction since 2000, according to data compiled by Crain’s Cleveland Business. In the city of Cleveland, major projects have included:

The $465-million Cleveland Convention Center opened in June 2013 and includes 225,000 gross square feet of Class A exhibit space, 35 meeting rooms and a 32,000- square-foot ballroom. The adjacent GCHI had a soft opening in June 2014 and will formally open in September. This 235,000-square-foot, four-floor facility is designed to serve practitioners, manufacturers and consumers in the health care field. These two new facilities are on pace to accommodate 200 events in 2014, attracting 182,182 attendees and generating 94,052 roomnights, according to the facilities’ manager, SMG.

The following table lists the number of events, anticipated attendance and forecasted roomnights impacting the Cleveland market for the next six years. 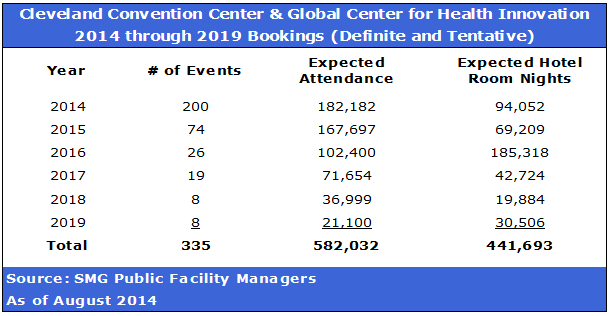 Downtown Cleveland recently has witnessed an influx of new attractions and restaurants to complement staples such as the Rock and Roll Hall of Fame & Museum, Great Lakes Science Center, Progressive Field (home of the Indians), Quicken Loans Arena (home of the Cavaliers), and First Energy Stadium (home of the Browns). Highlights include:

The Horseshoe Casino, which opened in May 2012 in the heart of the downtown area, attracted 3.3 million patrons and generated more than $243 million in revenue in 2013.
The Greater Cleveland Aquarium has attracted more than 700,000 visitors since opening in 2012.
Phase two of the Flats East Bank project is underway and will add new restaurants and condos to a space along the Cuyahoga River that already includes office towers, several restaurants and the Aloft hotel.
The Playhouse Square District is the country’s largest performing arts center outside New York, attracting more than 1 million patrons each year. Dining, shopping, art, upscale apartments, open park spaces and a 20-foot outdoor chandelier (the world’s largest) have been added as the district continues to evolve.

Perhaps the biggest “attraction” coming to Cleveland in 2014 is LeBron James, who is returning to the Cleveland Cavaliers after four seasons in Miami. Downtown businesses should experience a generous bump in revenues starting in October when the Cavs kick off the regular season.
The city stepped into the spotlight in August when it hosted the Gay Games, welcoming about 9,000 participants and 20,000 spectators for a week-long celebration of sports, human rights and inclusion. Preliminary estimates show a $40-million economic impact for the city. The city’s revitalization efforts will be on full display in 2016, when an estimated 40,000 to 50,000 people flock to Northeast Ohio for the Republican National Convention.

According to the Cleveland 2016 Host Committee, the Republican National Convention requires 16,000 hotel rooms be available for the convention in the host city. The committee reports that Cleveland will have 17,000 rooms within a 45-minute drive of downtown and 5,000 rooms in the immediate downtown area by 2016. Several hotels have opened in the last two years, and more than 10 in downtown Cleveland or nearby suburbs are under construction or in development. Six of the more notable downtown projects open or slated to open prior to the RNC are detailed below.

In June 2013, a 150-room Aloft hotel opened near the Cuyahoga River and Lake Erie in downtown Cleveland. The property is adjacent to the Ernst & Young Tower and is part of a $275-million Flats East Bank mixed-use project.

The 484-room Westin Cleveland hotel opened on 15 May 2014, in downtown Cleveland. Sage Hospitality developed the hotel, which is adjacent to the Cleveland Convention Center. The building formerly housed a 472-room Crowne Plaza Hotel, which closed in November 2011. The building underwent a $74-million property-wide renovation and conversion and is now in like-new condition.

The 156-room Metropolitan at The 9 – Marriott Autograph Collection hotel is under construction and will open in September 2014. The hotel is part of a larger, $250-million redevelopment of several buildings in downtown Cleveland, which will include 205 luxury apartments, a Heinen’s grocery store, restaurants and a 2,000-square-foot dog park on the 29th floor.

The 122-room Kimpton Hotel Cleveland is under construction in the 14-story Schofield Building downtown. Plans call for the conversion of floors two through seven into the 122-suite hotel and floors eight through 14 into 55 luxury residential apartments. The project received $5 million in state historic tax credits in June 2010. Though development has been delayed repeatedly, the Kimpton Hotel is now slated to open in 2016.

The 600-room Hilton Hotel Convention Center is under construction and is slated to open by June 2016. It is located adjacent to the Cleveland Convention Center and GCHI, and will have an underground connection to these facilities. Plans call for a 32-story building (28-story tower sitting atop a four-story atrium). The total budget for the Cuyahoga County-owned hotel project (which includes renovation of a nearby parking garage and demolition of a former building on the site) is $272 million.

The 180-room Drury Plaza Hotel is under development on East 6th Street, adjacent to the Cleveland Convention Center and GCHI. The six-story building, which formerly housed the Cleveland Metropolitan School District, was constructed in 1930. Conversion is scheduled to begin in late 2014, and the hotel is slated to open in 2016.

Additionally, a 206-room Le Meridien Hotel is in the early stages of planning. Its developer is working to secure financing and tax credits. It will be located in the now-vacant building that comprises the 1000 block of Euclid Avenue, near the Metropolitan at The 9 and Kimpton hotels. Le Meridien is a Starwood Hotels & Resorts Worldwide-affiliate brand.

Hotel & Leisure Advisors recently has completed many hotel feasibility studies in the Cleveland MSA, which includes Cuyahoga, Geauga, Lake, Lorain and Medina Counties. Our consultants continually track the recent and planned hotel supply additions in the region, as depicted in the following table. 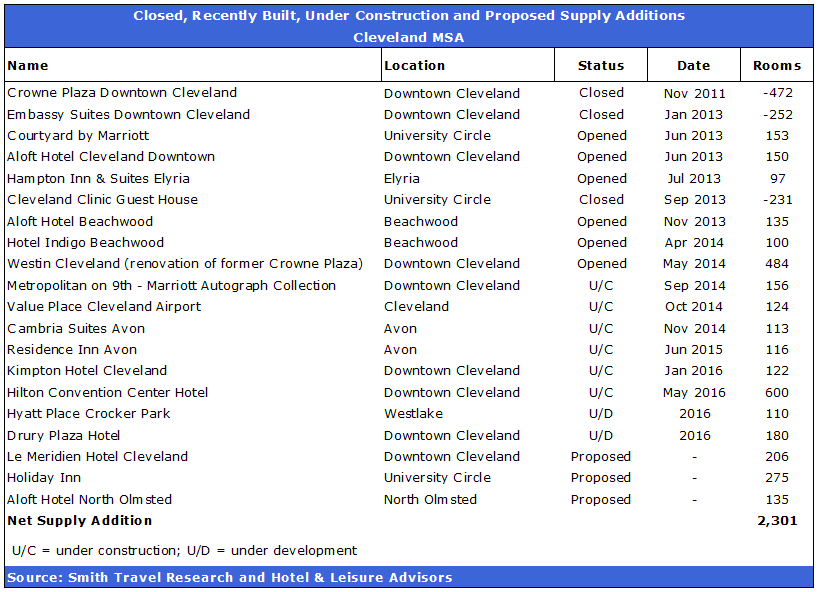 Including the three proposed hotels that have yet to break ground, the Cleveland MSA is poised to increase its available room count by 2,301 (net), which represents a 4.4% supply increase over a roughly five-year period. Can demand increases outpace Cleveland’s hefty addition to supply? Yes, as increased convention bookings and a well-timed 2016 boost from the RNC will help Cleveland absorb impact from the opening of the 600-room Hilton.

Though the Democratic and Republican conventions typically last only one week, former host cities report that impact is felt throughout the month leading up to the convention. Attendees stay an average of four to seven nights, and additional personnel stay anywhere from two to four weeks. Cleveland hopes the national spotlight cast on the city during June 2016 will showcase recent developments, possibly spurring future interest and investment in the area.

The following table depicts roomnight impact created by the past two Republican and Democratic national conventions, which were held in four host cities, as reported by STR, parent company of Hotel News Now. The data shows the impact during the time the conventions took place.

Though each of the conventions displaced some usual demand in the area, a portion of the displaced guests simply chose to visit these cities at a different time, meaning that the roomnights were still captured. According to data released by the four metropolitan areas, each city recorded a 24% to 37% occupancy increase year over year during the month in which the convention took place. Additionally, each city recorded an $80 to $95 average-daily-rate increase during the same period.

We have forecasted the Cleveland MSA’s occupancy and ADR for 2014 through 2016. Our forecast takes into consideration the numerous new developments, planned events (including the 2016 RNC) and hotel supply additions to the Cleveland market. 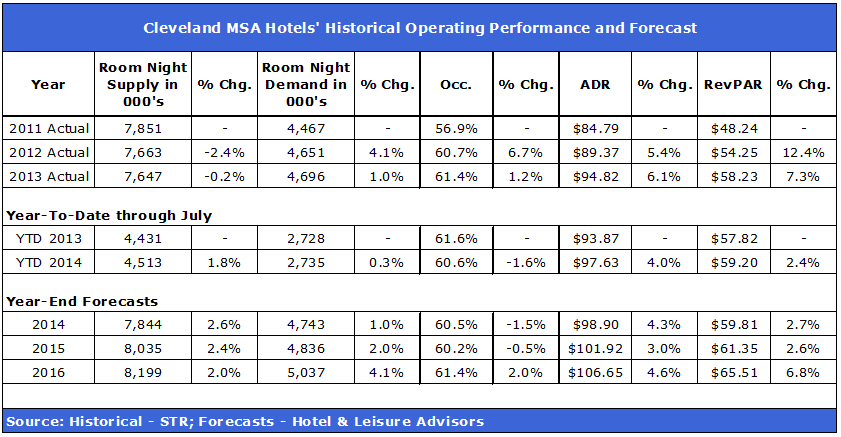 Year-to-date through July, the market is struggling to absorb a 1.8% supply increase that has occurred since June 2013. Though we anticipate an occupancy dip in 2014 and 2015, demand and ADR will continue to climb as upscale products enter the market and the convention center continues to ramp up. We forecast market-wide occupancy to return to 2013 levels in the year 2016.

Despite the addition of more than 2,000 new hotel rooms between 2013 and 2016, H&LA is forecasting Cleveland-area revenue-per-available-room increases in each of the next three years. Continued development projects, anticipation of the coming RNC and hype surrounding the return of LeBron James to the Cleveland Cavaliers will cast a bright light on the city and the entire metropolitan area, providing a great opportunity for all to see it’s not a city that developers, national conventions, sports superstars and world-renowned doctors merely settle for. For some, it’s become a city of choice.