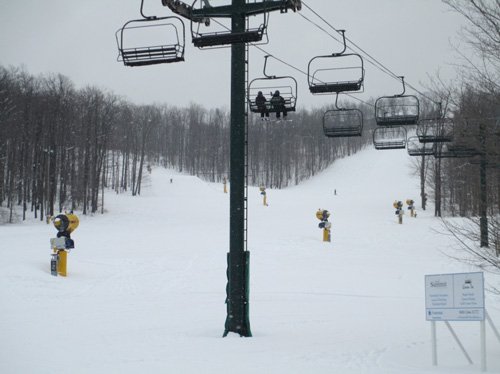 Snow sports have traditionally been expensive sports limited to a certain time of the year and to few places around country with elevation changes. Dry ski slopes have been around for over 50 years in European countries and are making their way into the U.S. and Canada. These facilities grew in popularity in places where there was limited or no nearby skiing option. There are approximately 500 dry slope centers operating in 40 countries and six continents worldwide. There are over 60 dry slope facilities in United Kingdom alone. However, there is only one in United States. The technology related to dry slopes has evolved over the past several decades. Dry slopes offer 365 days of skiing on artificial material that mimics the attributes of snow. Prices at facilities located in Europe range from $9 to $24 per hour including equipment rental. The slopes provide a consistent experience, allowing beginners and intermediate users an excellent opportunity to perfect their skills. The lower cost of building and operating such a facility compared to a typical ski resort makes snow sports more affordable and brings the slopes to the masses.

Traditionally, snow sports have been associated with ski resorts located in mountainous regions such as Aspen, Vail, Park City, Jackson Hole, Vermont and other ski destinations around the country. Most of these ski destinations are located in places that require people to fly or drive a few hours. In addition, once at the ski resort one has to pay for lift passes, rent ski equipment, rent a condo or stay at a hotel, ski lessons, meals, daycare, snow gear, and other miscellaneous expenses. This is certainly an expensive proposition for a family that has never been to a ski resort or ever tried skiing. Dry ski slopes provide an opportunity for skiing on a year round basis. Hotel & Leisure Advisors has completed a number of studies for ski areas throughout the U.S. including traditional ski resorts and dry ski slopes.

The graph on the next page presents National Ski Area Association (NSAA) statistics concerning participation in the sport for the past 30 years. 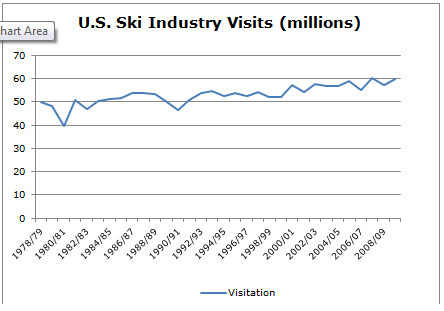 The U.S. ski industry has grown over the past three decades; however, participation in the sport still trails other sports such as basketball, football and baseball. According to data published by NSAA, the 2009/10 season was the second best season ever for the United States ski industry (second only to the 2007/08 season) in terms of skier visits. The top nine seasons have all occurred since the year 2000. Primary reasons for slow growth include weather conditions, seasonality, distance to ski resorts and affordability.

But now there is another option for beginners and famlies. For all those people who ever wanted to ski the powdery slopes of Aspen or Jackson Hole but never knew how to ski and did not want to spend a lot of money learning skiiing there is a new alternative: Artificial Dry Ski Slopes. Hotel & Leisure Advisors has recently completed multiple feasbility studies for dry ski slopes in the U.S. and Canada. These types of slopes are predominatantly found in European countries. The first of these slopes began to appear about 50 years ago as skiing became more popular in European countries like Great Britain, Belgium, and the Netherlands. It was difficult for people in these countries to reach the ski slopes as they were located far away from major ski destinations. England, where there are no major mountains with snow, has a huge population of ski and snowboard starved riders making dry slopes a popular alternative to traveling to the Alps. There are approximately 500 dry slope centers operating in 40 countries and six continents worldwide. There are over 60 dry slope facilities in United Kingdom alone. However, there is only one in United States.

Dry ski slopes are artificial slopes that mimic the attributes of snow and allows people to ski where natural slopes are inconvenient or unavailable. These slopes are lubricated using a mist or jet system to increase speed and prevent damage to equipment. The first of such facilities opened in North America in Lynchburg, Virginia, at Liberty University in 2009 using a material called Snowflex. Such was the response from local community that the university ordered an expansion of the ski area in the first month of its operations. The Snowflex material was also used in the opening ceremony of the 2010 Winter Olympics in Vancouver. Neveplast, another synthetic material used in dry ski slopes, was used in the opening ceremony of the 2006 Winter Olympics in Torino. According to the manufacturers of Snowflex, they are working on 18 projects in the United States and four projects in Canada. There are several different types of materials used to make dry slopes including Snowflex, Dendix, PermaSnow, Astrogelande, and Neveplast. 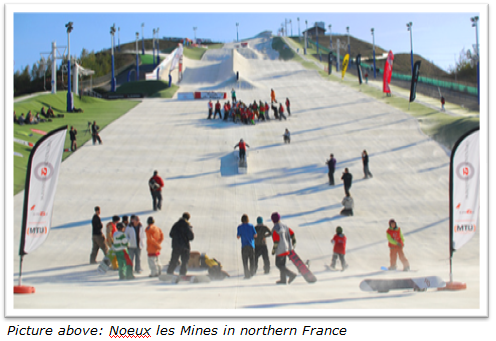 With the advent of dry slopes, it is now possible to bring the snow slopes to the masses. These facilities can be open year round. They can now ski down the slope on a hot summer day in July. We are not suggesting that dry slopes will ever replace the experience of skiing down a snow covered mountain. However, they do offer a unique chance to learn or practice skiing or snowboarding without spending all that money. They offer beginners and advanced skiers an opportunity to improve their skills in a very accessible location. These artificial ski slope facilities are making snow sports more affordable and accessible.

Dry slope facilities are much smaller than typical ski resorts, making it possible to build these facilities in both urban and resort environments. According to the makers of Snowflex, the cost of building the slope could range from $40 per square foot to $100 per square foot depending on the types of lifts used and the width, length, height of the slope. Most of the existing dry slope facilities offer runs starting at 150 feet in length. They also offer a main slope area for people with intermediate and advanced skills and a beginner slope which is used by beginners as a lesson area. In our opinion, an ideal urban dry slope facility should offer about 100,000 square feet or more of skiable area. However, smaller ones can be built based on the population base. The target market for such a facility is typically located within a two-hour driving distance of the facility. The primary mode of revenues for these facilities is selling admission tickets and equipment rental. Other revenue possibilities include food and beverage revenues, sponsorship, events and competitions, and a retail store selling winter gear.

Unlike traditional ski resorts that sell all-day and half-day lift tickets, the pricing for dry slopes facilities is typically based on hourly pricing. Prices for lift tickets at Liberty University are $7 per hour and an additional $12 for equipment rental. However, these prices are subsidized as the facility is owned and operated by the university. Prices at facilities located in Europe range from $9 to $24 per hour including equipment rental. One could sell monthly or annual passes or package it with hotel room rates. Equipment rentals are typically included in the admission fees as not many people own skis or ski boots. 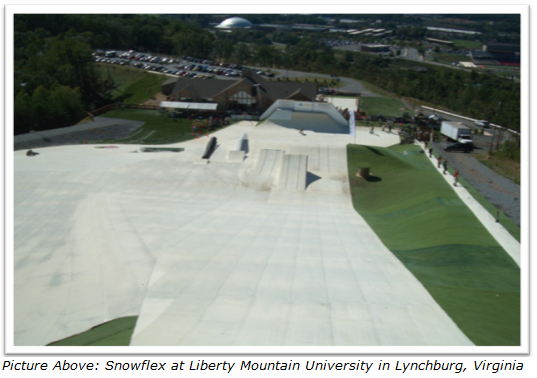 These facilities would compete for the same entertainment dollars that people would spend at a family entertainment center, on bowling or at a movie theatre. An ideal facility would also include a family entertainment center attached to a dry ski slope facility. Another possible location for such a facility would be at an amusement park or a multi-faceted resort. Many amusement parks typically add new rides to increase visitation or increase admission prices. Amusement parks could certainly charge a premium for such artificial ski slopes. Many cities and townships across the country have added community recreation centers in recent years which include nearby soccer or baseball. Adding a dry ski slope to an existing community center would offer a unique amenity for local residents. Existing resorts near major urban cities could also add dry slopes as this would provide an additional revenue generating opportunity. Some ski resorts in the U.S. do offer tubing hills using the Neveplast material.

Overall, dry ski slopes provide convenience and accessibility to sports that were once restricted to a specific time of the year and limited by geographic terrain and weather conditions. Unlike traditional ski resorts, where the slope conditions depend on the snowfall and weather, a dry ski slope offers a consistent skiing experience. Snow-covered slopes can change with a shift in temperature or precipitation, however; dry ski slopes are always the same, which is a plus for freestyle skiers looking to perfect a trick. The most popular activity on dry slopes is freestyle skiing and snowboarding. Dry ski slopes present an opportunity for developers, community leaders, resorts and existing amusement facility operators that are considering expansion to add a unique new feature to the list of amenities. With improvements in dry slope technology, such facilities can now be built in major urban metro areas as stand-alone facilities with an attached family entertainment center and in resort destination locations with an attached hotel. These dry ski slopes are ideal to introduce skiing to beginners, but at the same time they also provide an opportunity for more avid and learned skiers to keep their skills sharp year round.

Nuresh Maredia is a hospitality consultant and appraiser. He has a wide range of experience in operations in hotels and resorts. Mr. Maredia performs appraisals, market feasibility studies, economic impact studies, and impact studies throughout North America for a wide range of hotels, waterparks, amusement parks, ski resorts, family entertainment centers, timeshare resorts, and other leisure real estate. Nuresh Maredia can be reach via telephone at 216-228-7000 ext. 24 or via e-mail at nmaredia@hladvisors.com.

David J. Sangree, MAI, CPA, ISHC is the President of Hotel & Leisure Advisors, a national hospitality consulting firm. He can be reached via telephone at 216-228-7000 ext. 20 or via e-mail at dsangree@hladvisors.com.