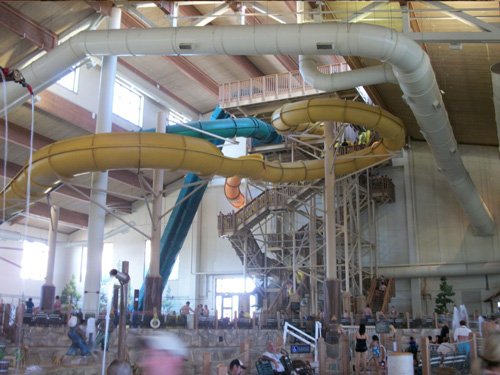 The following table indicates H&LA’s definition of the three types of indoor waterparks, which currently exist and are being developed in the United States and Canada.

Existing Supply: We have conducted a survey concerning the number of indoor waterpark destination resorts which were open as of year-end 2007 and those which are projected to open in 2008. The following table indicates the existing supply of indoor waterpark destination resorts as of January 2008. It should be noted that the figures used for the waterpark square footage indicate the net indoor waterpark area which excludes areas such as the arcade, gift shop, mechanical rooms, etc. For advertising purposes, some resorts indicate higher figures by including these additional spaces. 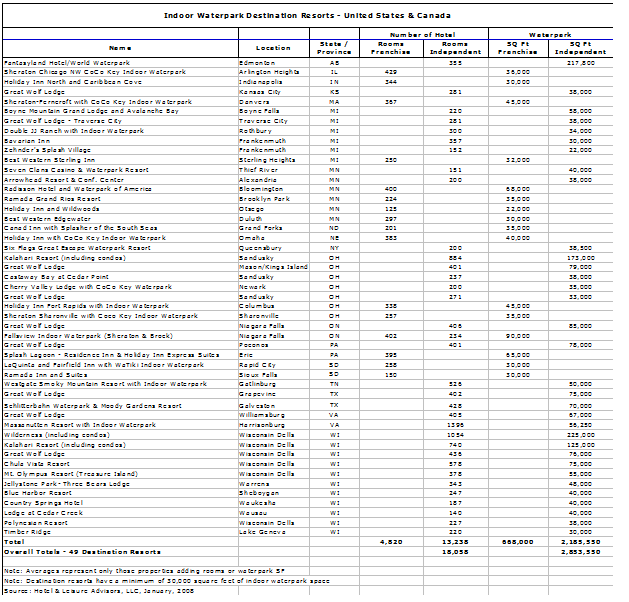 The number of indoor waterpark destination resorts grew by six new properties in 2007. In addition, six existing properties made additions to their facilities of either indoor waterpark space or new guest rooms. The largest new developments included the following:

Great Wolf Lodge opened the 402-room Great Wolf Lodge in Grapevine, Texas across from the Gaylord Texan Resort in late 2007. The resort features a 75,000 square foot indoor waterpark. The resort has begun construction on a 203-room expansion along with a new conference center with approximately 30,000 square feet which will open by year-end 2008.
CoCo Key Waterparks opened two new waterparks in 2007 with additions to the Sheraton Ferncroft in Danvers, Massachusetts and the Sheraton Hotel in Sharonville, Ohio. The Danvers location offers 45,000 square feet of waterpark while the Sharonville location features 35,000 square feet. They also added an indoor waterpark with 25,000 square feet to the Best Western Clocktower in Rockford, Illinois.
2008 Openings: We have researched the 2008 projected openings of indoor waterpark destination resorts. The following table indicates those properties which we expect to open in 2008.

The number of projected destination resort openings in 2008 is higher than those that were projected to open in 2007. The openings projected for 2008 are well below the interest level by developers due to the current challenges of finding financing and investors for these entertainment-related projects. Of the properties projected to open in 2008, five properties are entirely new construction facilities while the remaining ten represent additions to existing hotels or additions to existing indoor waterpark destination resorts. The Great Wolf Lodge in Grand Mound, Washington, and the Key Lime Cove Resort in Gurnee, Illinois represent the two largest properties to open in 2008. Both properties will feature multiple restaurants and gift shops, spas, larger indoor water park areas, and themed guest rooms.

The Silver Mountain Resort, the Great Adventure Water Resort, the Red Jacket Inn, the Maui Sands at the existing Holiday Inn Express, and the Resort at Split Rock represent waterpark additions to existing properties. The additional CoCo Key Indoor Waterpark properties, located in Waterbury, Connecticut; Kansas City, Missouri; and Mt. Laurel, New Jersey are being developed by a partnership led by Sage Hospitality and Wave Development. Sage has five existing CoCo Key properties and is due to have a total of eight properties nationwide by the end of 2008. All of their properties are branded hotels where an indoor waterpark was added to the property.

Indoor waterpark resorts have emerged as a leisure option for families looking for a convenient weekend getaway or vacation. Historically, the indoor waterpark resorts were located in the Wisconsin Dells region, but growth continues throughout the United States. We project continued development of indoor waterpark resorts in the northern United States because they offer an attractive year-round leisure opportunity for families and attractive investment returns for developers. There has been substantial growth in supply in the waterpark segment, and saturation of the market could become an issue in the future. Therefore, we recommend a thorough feasibility analysis be performed for projects to ensure that the project’s return on investment is adequate for the development.