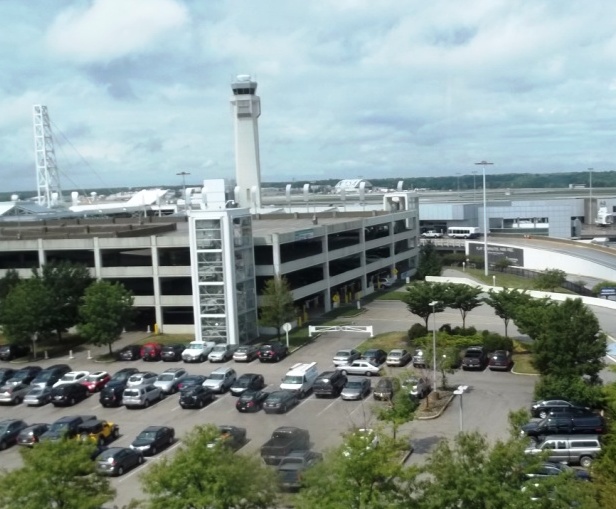 Within the continental United States, there are hundreds of airport facilities ranging in size from Hartsfield-Jackson Atlanta International Airport in Atlanta, Georgia, which had over 44 million enplanements in 2011 to facilities with just over 10,000 enplanements annually. Recognized as economic engines for their respective communities, airports foster commercial development within their markets and frequently support the development of hotel sub-markets within a metropolitan area. While most big city airport markets have hotels surrounding the airport, a smaller number of communities have hotels located on the airport grounds, and even fewer have hotels attached to the airport’s passenger terminal.

We have profiled hotels that adjoin airport terminals at the following airports: 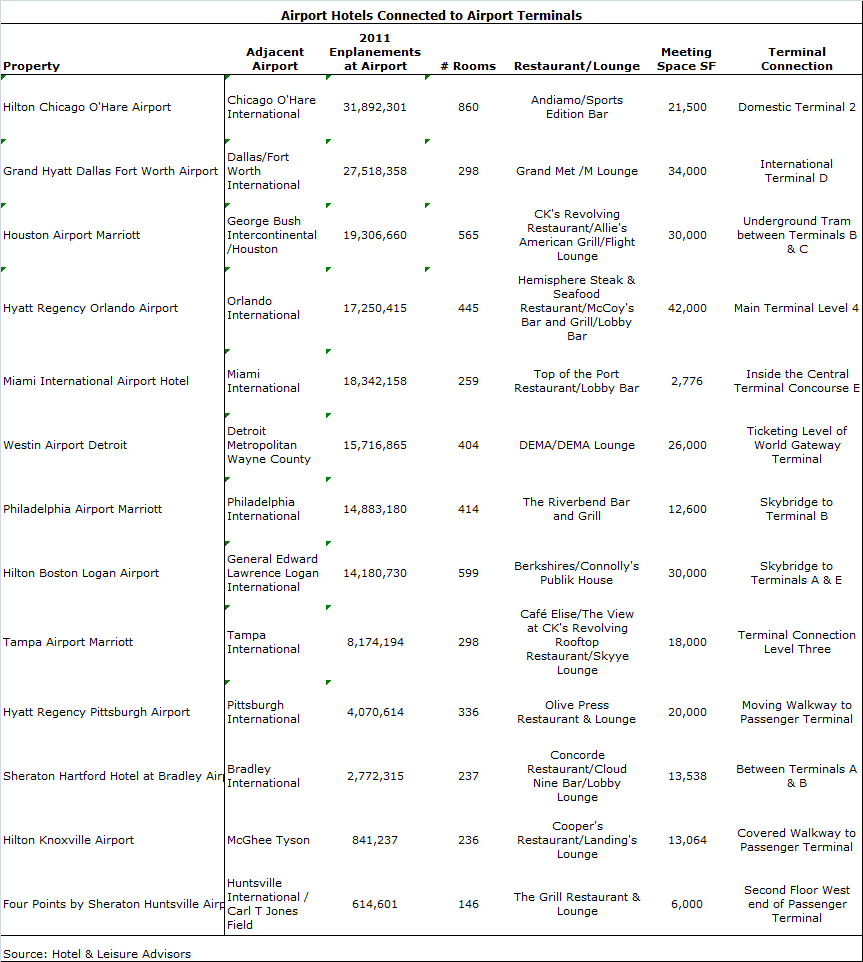 The previous table shows an array of hotel developments serving the identified airports. The number of guest rooms at these hotels range from 860 rooms at the Hilton Chicago O’Hare Airport, complementing the sample’s busiest airport, Chicago O’Hare International, to 146 guest rooms at the Four Points by Sheraton Huntsville Airport at the least active airport, Huntsville International / Carl T Jones Field. Miami International Airport Hotel does not have a swimming pool or fitness center. The Four Points by Sheraton Huntsville Airport also has no pool but has a fitness center and is adjacent to the Sunset Landing Golf Course. Each of the remaining properties offers a fitness center and swimming pool. Three of the facilities shown also provide some form of spa service. All of the properties are full-service hotels providing at least one restaurant, a lounge, extensive meeting space, and in about half the cases a coffee shop. The Hyatt Regency Orlando Airport adjoins a modest shopping mall offering a variety of stores and a duty-free shop. 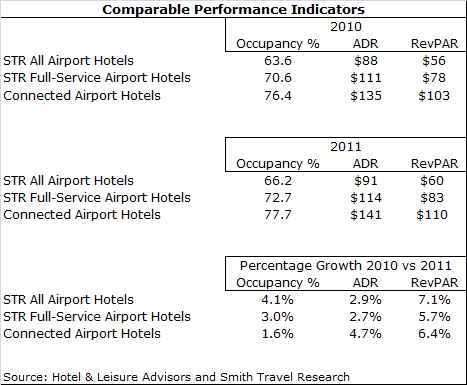 Staying at a connected airport hotel has many benefits for travelers. It can afford the guest the opportunity to avoid extra time waiting for an airport shuttle or extra expenses such as a taxi to a nearby hotel or, in some cases, a rental car. Guests have the ability to walk to and from the hotel to the terminal. Guests will pay a premium for the opportunity to stay at a full-service, connected airport hotel, as our research indicates that hotels connected to airports achieve higher occupancy and ADR levels than other nearby airport properties. These hotels have a clear advantage and a wide appeal to the traveling public.

Author: Joseph Pierce, Director of Appraisal & Consulting Services with Hotel & Leisure Advisors, received an MBA from Michigan State University’s hospitality program in 1981 and a Bachelor of Science in Accounting from the State University of New York at Brockport in 1978. He has a wide range of experience in operations and accounting in hotels and resorts. Mr. Pierce has been a Controller and Director of Finance and Accounting for Clarion, Renaissance, Marriott, and Westin hotels. He also managed an independently owned hotel, The Talbott Hotel in Chicago. Mr. Pierce has performed appraisals, market feasibility studies, consulting assignments, and impact studies nationally since 2003. He can be reached via telephone at (216) 228-7000 ext. 23 or via email at jpierce@hladvisors.com.