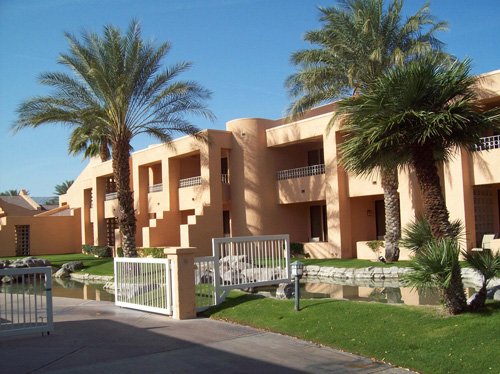 Summary: Houston went through a devastating recession in the 1980s when the price of oil plummeted and thousands of jobs were lost. History repeated itself and the price of oil plunged again in 2008. However, this time the impact was much less for Houstonians. This was true of the Houston lodging market also, compared to other major metropolitan cities around the country. The lodging industry in Houston bounced back quickly from the recession primarily due to the expanding energy industry in the Houston area. Increased activity in southwest Texas at the Eagle Ford Shale has also benefited companies located in Houston. In addition to the energy sector, Houston is also supported by the healthcare and shipping industries which also play a key role in supporting the local lodging market.

Texas has received many accolades in the recent years. The Lone Star State is first in job creation nationwide, first in export growth, fastest in population growth, first in relocations and expansions, and the list keeps growing longer. One of the reasons behind the recent success in Texas is the well-established, expansive, and viable energy industry. Here are a few facts about the Houston metropolitan area and its contribution to the state of Texas.

Houston accounts for more than a third of the state’s GDP despite having less than a quarter of the state’s population.
Houston accounts for more than 50% of Texas exports.
Bank deposits at FDIC-insured institutions in Texas grew by more than $153.1 billion between June 30, 2010 and June 30, 2013. Nearly half that growth occurred at Houston financial institutions. Houston’s growth exceeded the combined growth of Austin, Dallas-Fort Worth, San Antonio, and El Paso.
One in every three homes constructed in Texas was built in the Houston metropolitan area.
According to Washington-based Council for Community and Economic Research, also known as C2ER, Houston has the lowest cost of living among the nation’s most populous metropolitan areas.
The Port of Houston ranks first in the United States in international waterborne tonnage handled and second in total cargo tonnage handled.
Houston, which is now often called the Energy Capital of the World, is home to 24 Fortune 500 companies, second only to New York City. This comes as a surprise to many people outside of Houston. Houston is the top U.S. market for exports, surpassing New York City in 2013, according to data released by the U.S. Department of Commerce’s International Trade Administration. In 2012, the Houston MSA recorded $110.3 billion in merchandise exports. Petroleum products, chemicals, and oil and gas extraction equipment accounted for approximately two-thirds of the metropolitan area’s exports. Some of the major corporations headquartered in Houston include Philips 66, ConocoPhillips, Sysco, Marathon Oil, Cameron International, Halliburton, Baker Hughes, and Waste Management.

Between December 2009 and May 2013, Houston added 291,200 jobs, representing a 265% recovery rate, surpassing the rate of recovery in the top four U.S. gateway markets – New York, Washington, D.C., Los Angeles, and San Francisco. For the 12 months ending October 2013, the Houston metro area created 79,600 jobs, a 2.9% annual growth rate which was slower than the previous year. Growth peaked at a 4.5% annual rate, or 119,300 jobs, during the 12 months ending February 2013 which was the fastest pace post-recession. Businesses knew that the frenetic pace of job growth that Houston experienced over the past few years couldn’t be sustained for long. Some easing of the employment was inevitable. Many industry experts project that the easing has begun and project a more normal employment growth rate beginning 2014/15.

The presence of large companies and the growing energy sector (both traditional and alternative) has helped the Houston lodging industry recover quickly from the recent recession. The energy industry accounts for approximately 50% of total Houston employment. There are more than 3,700 energy-related companies including more than 500 exploration and production firms, 400 chemical plants, 170 pipeline transportation firms, and 220 companies that manufacture plastic and rubber products. The Houston metro area has a variety of submarkets which capture the lodging demand. The most prominent of these submarkets are described in below:

Downtown/Central Business District: Houston’s Central Business District greatly benefits from the presence of various companies, the convention center, the Theater District, and sports and entertainment venues such as the Toyota Center and Minute Maid Park. These venues bring large amounts of meeting and leisure demand to hotels in the Downtown/CBD submarket. The Greater Houston Convention & Visitors Bureau reports Houston in 2013 hosted 319 meetings and conventions with approximately 676,000 attendees booking 481,000 room nights. The bureau expects Houston to host a comparable number of meetings and delegates and book as many if not more room nights in 2014. In 2013, the city of Houston announced a $324 million second convention center hotel. The 1,000-room Marriott Marquis will be connected via a skybridge to the George Brown Convention Center. The hotel is scheduled to open in 2016. The METRORail is also slated for expansion and is currently under construction. Key attractions and destinations along the new lines include the George R. Brown Convention Center, Houston Theater District, BBVA Compass Stadium (MLS Houston Dynamo), University of Houston and Texas Southern University. With the development of the second convention center and the expansion of the METRORail the city will become more attractive to larger conventions and events.
Medical Center: Houston is the site of the internationally renowned Texas Medical Center, which contains the world’s largest concentration of research and healthcare institutions. Employing more than 100,000 people, institutions at the medical center include 13 hospitals and two specialty institutions, two medical schools, four nursing schools, and schools of dentistry, public health, pharmacy, and virtually all health-related careers. More heart surgeries are performed at the Texas Medical Center than anywhere else in the world.
Galleria: The Galleria district is Houston’s premier location for upscale shopping and dining. It boasts the 8th largest mall in the nation. It is one of the best performing hotel submarkets in the city. The Galleria attracts national and international visitors, including many from Latin America. Hotels in the area achieve higher ADRs and occupancy levels driven by strong corporate demand during the weekdays and supported by robust tourism levels on the weekends.
The Woodlands: Located 32 miles from downtown Houston, the Woodlands area is a mixed-use master planned community. Hotel supply is slated to increase in and around the Woodlands area due to the 385-acre under construction ExxonMobil campus. Approximately three million square feet of office space is planned for the company spread over 20 buildings. Approximately 10,000 employees are projected to work at the campus. Hotel demand in the Woodlands area is projected to increase with the completion of the ExxonMobil campus. Furthermore, Southwestern Energy plans to consolidate its 1,000 Houston-area employees near the ExxonMobil campus. The 10-story building is under construction and is slated for completion by year-end 2014. Some of the demand from ExxonMobil and Southwestern Energy is projected to be new lodging demand while some lodging demand will be moving to the Woodlands area due to the company consolidating its offices in the Houston area.
Energy Corridor: Over the last six years, real estate in the Houston’s Energy Corridor has been a hot commodity for office, retail and hotel. Growth has been evident within all sectors. A quick drive along Interstate 10 west of downtown will prove the amount of new development. The market includes over 20 million square feet of office space. Major employers in the the Energy Corridor District include BP America, Shell Exploration and Production, ExxonMobil Chemical, ConocoPhillips, CITGO, Dow Chemical, PGS, and Mustang/Wood Group. The area hotels record stronger weekday occupancy levels but demand tapers off during the weekends due to a lack of leisure demand generators.
With its fast-expanding energy hub and already booming oil market, Houston has been on the radar of hotel owners and investors. The following table illustrates recent supply additions and under construction hotels in the Houston market area. 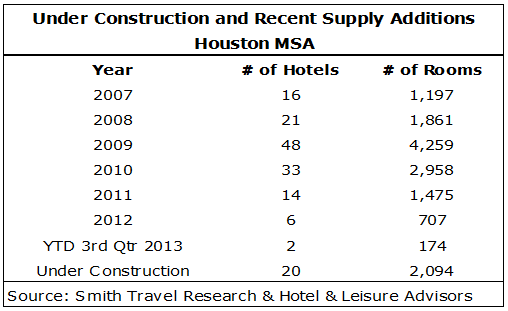 The years 2009 and 2010 saw big increases in supply as most of the properties had obtained financing or started construction prior to the recession. Since then, supply has tapered off which has allowed hotels to recover quickly from the recession. Furthermore, during the recession many larger hotels in the area conducted renovations and took rooms offline for a short time. The following table illustrates changes in rooms available and rooms sold in Houston area. 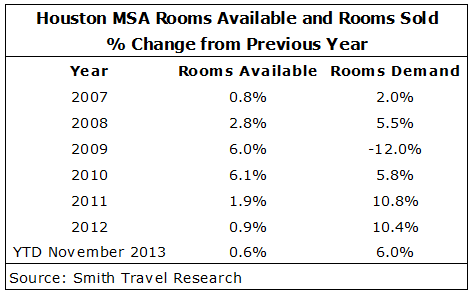 With the ongoing recession and hotel supply increasing dramatically in 2009 and 2010, the Houston lodging market suffered a decline in both occupancy and ADR. However, the lodging market has recovered quickly with strong increases in RevPAR. We project that such high growth rates will not be sustainable and the future growth rates will be comparable to other top major metropolitan areas. A stronger demand for rooms and fewer development projects in the pipeline resulted in stronger RevPAR increases in 2011, 2012, and 2013.

Outlook: We project that the hotel industry in the Houston area will continue to grow due to a strong presence of the top energy companies and its continuing expansion. However, with one industry contributing 50% of the metro areas employment, there are some drawbacks. A drop or increase in global oil prices will have a direct impact on the local energy companies and the amount of drilling activity going on in the nation and the region. Any regulation changes affecting fracking may slow down or derail the domestic oil production growth. Approval of the Keystone Pipeline would benefit the Texas Gulf and will bring in more lodging demand especially near the refineries. The city’s tourism arm, the Greater Houston Conventions and Visitors Bureau, is working to attract large events to the area. The city has already signed the 2016 NCAA Final Four and the 2017 Super Bowl. Southwest Airlines will start operating international flights out of the Houston Hobby Airport in 2015. With projected growth levels, developers and investors continue to express interest in building new properties. As market occupancy levels are above the 65% to 68% mark, new hotel developments are needed in a market to accommodate the additional new demand. However, developers and investors need to do their due diligence including conducting a market feasibility study prior to purchasing land for hotel development.

Author: Nuresh Maredia is a hospitality consultant and appraiser and has completed assignments in over 30 states. He has a wide range of experience in operations in hotels and resorts. Since joining Hotel & Leisure Advisors, Mr. Maredia has completed over 200 studies. He has generated appraisals, market feasibility studies, economic impact studies, and hotel impact studies for a wide variety of leisure and hospitality-oriented property types including golf courses, hotels, waterparks, amusement parks, ski resorts, family entertainment centers, timeshare resorts, and other leisure real estate. He obtained his Bachelors in Finance and Masters in Hospitality Business from Michigan State University. He is a state certified real estate appraiser in Texas, Ohio, and other states.