The story is a familiar one. A hotel that formerly outperformed its competitive set is now struggling to maintain market position. Rate and occupancy penetration indexes are headed in the wrong direction, and online reviews regularly contain comments such as “needs a refresh” or “feels dated.”

Even if the hotel’s brand hasn’t issued a mandatory property-improvement plan, completing a renovation may be financially worthwhile.

Signs your hotel needs a renovation
While several factors need to be considered prior to planning a renovation, the following are signs that it may be time:

Declining penetration index (capture rate of available roomnights) vs. the hotels in your STR competitive set

competitors are upgrading their facilities

brand mandates due to failed inspections, new design features, franchise agreement renewal, or a change in ownership (each of which may require completion of a PIP)

Impact on a sample focused-service hotel

Since renovation directly affects a hotel’s marketability, functionality, profitability, perception and value, this issue has significant implications for hotel executives, owners and operators. To illustrate this point, Hotel & Leisure Advisors quantified financial impact on a sample hotel for a six-year period that included three years prior to renovation, the year in which the renovation occurred and the two years after the completed renovation. 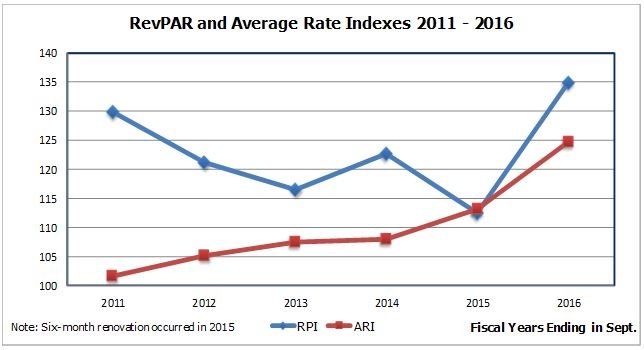 In our analysis, we used data for an actual focused-service hotel with roughly 3,000 square feet of meeting and event space and between 150 and 200 guestrooms. The hotel is in an urban area, is affiliated with a national franchise and is well-established in its market. The property underwent a $9-million propertywide renovation between November 2014 and April 2015. The following tables show the hotel’s performance metrics before, during and after the renovation.

From 2011 through 2013, the sample hotel recorded declining occupancy levels. The hotel was tired and had yet to undergo a major renovation since opening in 2000.

Prior to the renovation, the hotel’s average rate index was inching upward. It plateaued in 2014 at 107.9% of fair market share. The hotel’s RevPAR Index reached its lowest point in 2015—the year the renovation took place—which was expected due to some guests choosing to temporarily avoid the hotel and rooms being out of order. In the year following the renovation, both indexes jumped to levels above the range recorded since 2011.

Due mainly to a post-renovation increase in rooms revenue, the hotel improved its net operating income as a percentage of total revenue by 14.5% from 2014 to 2016. Another contributing factor to the revenue boost was the addition of a new revenue center. As part of the renovation project, this hotel transformed a nonrevenue-generating portion of its lobby into a full-service bar, which has a high profit margin.

We recommend hoteliers consider monetizing underutilized portions of their property if possible. Rooftop bars are enjoying a surge in popularity and are just one example of a way to manufacture revenue. Dovetailing a new amenity with the renovation’s planning, design and construction can be a cost-effective way to add a revenue center.

The following table presents the hotel’s average TripAdvisor ratings before, during and after the renovation. These ratings are based on a scale of one to five, with five being the maximum possible score. 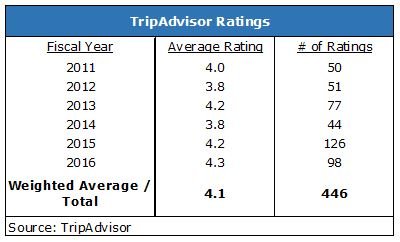 In 2014—the year prior to the renovation—the hotel tied 2012 for its lowest average TripAdvisor rating. The property’s guestrooms had a dated and somewhat worn appearance, which is understandable after 14 years of guest use and abuse. After completing the renovation, the hotel’s average TripAdvisor rating has trended upward and is now at its highest level in the last six years—0.2 points higher than the historical weighted average.

Return-on-investment timing
When considering the expenditure of millions of dollars on a major hotel renovation, hoteliers need reliable estimates of the return on investment and when it will be achieved.

Since the sample hotel was purchased just prior to being renovated, we calculated ROI by comparing the value of the hotel after renovation (in a stabilized year) to the sale price. The hotel sold for $17.7 million, which included real estate, personal property and any goodwill or business value. Immediately following the purchase, new ownership completed a $9-million renovation. Therefore, the total cash outlay was $26.7 million.

By implementing the discounted cash flow income capitalization method typically used in appraisals, we estimated the value of the sample hotel “as completed” (as of the 12-month fiscal year following completion of the renovation). Our DCF analysis indicated that the hotel’s net present value exceeded the $26.7-million cash outlay, indicating the renovation was feasible. In the 12 months following renovation, the property recorded an annual NOI approximately 33% greater than the figures obtained during the 12 months prior to completion of the renovation.

Although the sample hotel decreased some operating expenses following renovation—due mainly to energy and property maintenance reductions—most of the NOI increase occurred from gross revenue increases. The change in value also accounts for inflationary increases, the time value of money, and other positive and negative variables that might affect the hotel’s RevPAR gains—such as supply additions to the competitive market, the ramp-up period following renovation and the influence of market forces that affect a property’s demand. Hotel & Leisure Advisors completes a full market analysis as part of all “as completed” valuations in order to properly account for these variables.

Hoteliers must consider their guests as well as their balance sheets when deciding whether or not to renovate, when to begin the process, and how much to spend. Additional considerations include the timing, ROI, mandates imposed by franchise companies and the expected holding period desired for the asset. As general contractors would agree, each hotel is unique, and each renovation project presents distinctive challenges. Scores of variables affect the cost and duration of hotel renovation projects, even among identical brands in similar parts of the country. As such, there are few universal hotel renovation cost guidelines; actual costs incurred vary greatly.

In a mere 12 months, our sample hotel was able to increase its market value enough to justify its $9-million renovation investment, which is excellent. The property is poised to yield a positive return and out-penetrate its competitive set of hotels for the next several years. Although some hotels take longer to realize their renovation investment’s return, the overall impact can still be positive and financially worthwhile. The key is to spend enough to improve the hotel’s performance and perception while avoiding overspending, which can quickly void financial gains.