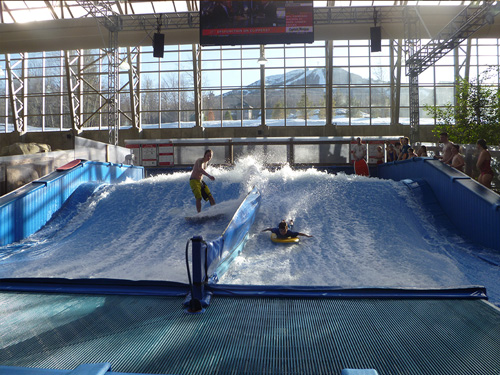 A resort with an outdoor waterpark is defined by H&LA as a lodging establishment that contains an outdoor aquatic facility with three or more waterpark elements requiring lifeguards such as slides, lazy rivers, or wave pools. These resorts will have a more elaborate outdoor waterpark area that is utilized primarily by hotel guests or can also be open to the public. 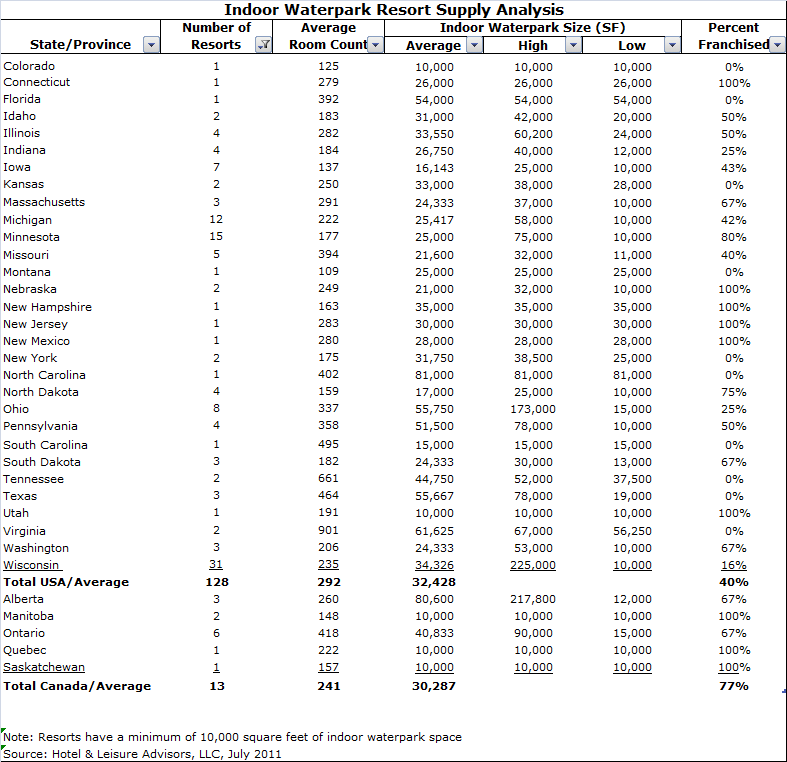 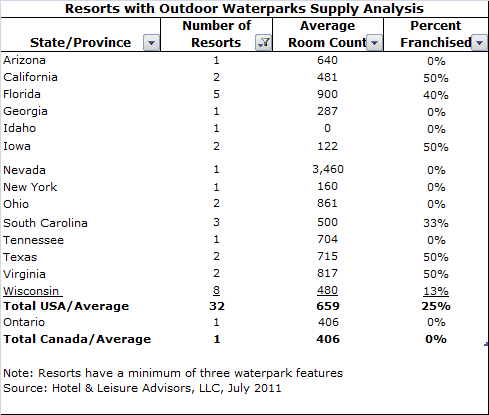 Performance of Indoor Waterpark Resorts: In spite of the economic slowdown, the performance of many indoor waterpark resorts continues to be positive. For example, the Great Wolf Lodge chain reported relatively flat occupancy and higher average daily rate for year-end 2010 as compared to 2009. For 2010, the chain reported an overall occupancy percentage of 59.7% with an average daily rate of $252.30. The 2.9% increase in RevPAR for all Great Wolf Lodge properties occurred primarily due to higher average daily rates at their properties. The CEO of Great Wolf Resorts was on the CBS-TV hit Undercover Boss in the fall of 2010, which boosted awareness of and interest in the chain. Other well-run properties we reviewed exhibited improved levels of occupancy performance in 2010 as travelers started to feel secure enough in their employment to take short, family vacations.

Although the performance of many indoor waterpark resorts continues to be positive, other properties have not fared as well. The nine CoCo Key Waterpark Resorts sold at auction earlier in 2011 achieved occupancy levels ranging from 34% to 63% in fiscal year 2010 and relatively low ADRs, which resulted in lower sale prices for each of the properties. The Grand Rios Waterpark Resort in Brooklyn, Minnesota, closed in the spring of 2011 due to operational issues and financial problems.

The challenges faced by these properties and others indicate the need for strong management and marketing for indoor waterpark resorts. Properties need to plan well for financing and other financial issues. Those properties suffering financially were unable to achieve a strong enough level of performance to pay outstanding balances on loans and other expenses.

2010 Openings: We analyzed the openings or expansions of indoor waterpark resorts that occurred in 2010. Based upon our research, eight indoor waterpark projects opened or expanded in the United States and Canada as shown in the following table.

The previous table includes one new indoor and outdoor waterpark resort opened in Orlando, which was a renovation of the former independent hotel. The other seven properties listed were all additions of water slides, rooms, and adventure park amenities. The economic recession and financing crunch greatly reduced the number of additions to waterpark resorts in 2010.

2011 Openings: The following table indicates properties that are projected to expand or open in 2011.

Our research indicates that, in 2011, nine existing hotels in the United States and Canada are developing new waterpark components or expanding with a water slide or theme park component. The list includes two new construction hotels with waterparks in Oklahoma and Vermont along with one new construction indoor waterpark without a hotel in Oregon. The following are some highlights of recent openings and changes to waterpark resorts:

The Evergreen Indoor Waterpark opened in June, 2011 in McMinnville, Oregon. It is one of only six standalone privately-owned indoor waterparks in the United States and has an actual 747 Boeing airplane located on the top of the waterpark from which various slides start. The recently opened waterpark is already a big hit with families and children in the Northwestern United States.
Splash Lagoon Indoor Waterpark in Erie, Pennsylvania, is adding a large wave pool and additional rides to the existing 65,000 square foot indoor waterpark facility. The expansion should open during the late summer of 2011.

Jay Peak Resort in Jay, Vermont, is a ski resort that is adding an indoor waterpark and 173-room hotel to its four season resort campus. The indoor waterpark is due to open in December 2011, and the hotel is due to open in January 2012. It will feature the only indoor Aqualoop by Whitewater in the United States as well as a double surfing machine, indoor activity river, and multiple slides.
Kalahari Resort in Sandusky, Ohio, is constructing a $22 million, 115,000 square foot addition to its conference space, which is due to open in December 2011 along with eight new condominiums that will allow the property to attract larger groups and conventions. The addition will include a 38,000 square foot grand ballroom/exposition center.

We project continued interest in the development of indoor waterpark and outdoor waterpark resorts in the United States and Canada because these resorts offer an attractive year-round leisure opportunity for families and attractive investment returns for developers. The development of an outdoor waterpark addition is less expensive than an indoor waterpark addition and can add seasonal recreation to a property. In some markets this may be a better idea due to the higher costs of developing an indoor waterpark. Before a new project is developed, we recommend a thorough feasibility analysis be performed to ensure that the project’s return on investment is adequate for the development. For existing projects, we recommend a creative and experienced management team be hired in order to generate a higher level of demand for the property.

David J. Sangree, MAI, CPA, ISHC is President of Hotel & Leisure Advisors, a national hospitality consulting firm. Mr. Sangree’s expertise is in the appraisal and analysis of hotels, resorts, indoor waterpark resorts, waterparks, amusement parks, conference centers, ski resorts, and golf courses. He has performed studies on more than 1,000 existing and proposed hotels in more than 46 states in all price ranges including economy, full-service, extended-stay, and luxury hotels and resorts including indoor waterpark resorts. He has been an active appraiser/consultant since 1987 and also has 10 years of work experience in the hotel/restaurant industry, including management positions with four Westin Hotels properties.