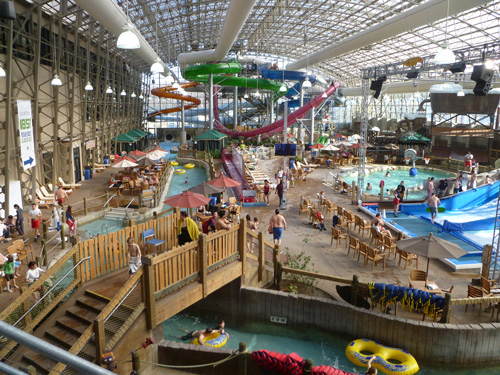 The country appears to be pulling out of the recession and heading for calmer waters if waterpark developments are any indication. While the flow of waterpark leisure development slowed down following the economic recession of 2009 and 2010, it is now picking back up as financing becomes more widely available. The resulting waterparks will be welcome additions to many communities and resorts throughout the country.

The World Waterpark Association has estimated approximately 85 million attendees at North American waterparks during 2012, which compared to 82 million in 2011 and 79 million in 2010. This estimate includes attendance at all municipal and private waterpark facilities in North America, including indoor and outdoor waterparks.

Research conducted by Hotel & Leisure Advisors indicates that there are 784 waterparks in the United States, 16 of which opened in 2012. Our research shows that 21 more are expected to open before 2013 draws to a close.

A resort with an outdoor waterpark is a lodging establishment that contains an outdoor aquatic facility with three or more waterpark elements requiring lifeguards such as slides, lazy rivers, or wave pools. These resorts will have a more elaborate outdoor waterpark area that is utilized primarily by hotel guests or can also be open to the public.

An outdoor waterpark is an outdoor aquatic facility with three or more waterpark elements requiring lifeguards such as larger slides, lazy rivers, or wave pools. These parks will often offer additional splash features for younger children as well.

By the end of the year, the status of U.S. waterparks showed healthy numbers. The total number of waterparks was close to 800, with the lion’s share being outdoor parks. 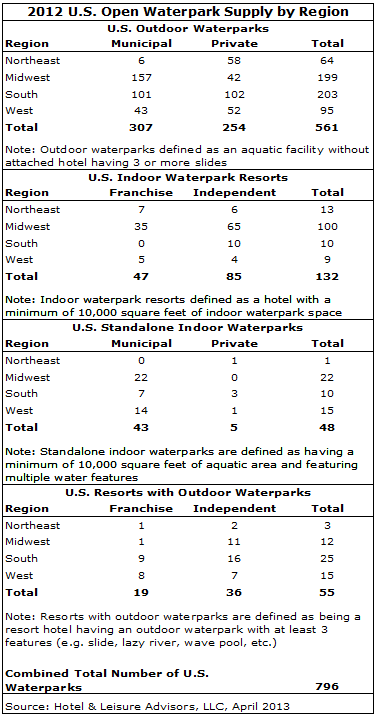 Moving into 2013, the country is set to see the opening of more waterparks in almost every category.

Three new indoor waterpark resorts opened in 2012, while several others expanded in various ways. The largest indoor waterpark opening was the 80,000 square foot Schlitterbahn Beach Resort in South Padre Island, Texas, which was a conversion of a former Holiday Inn.

The Soaring Eagle Resort is a new construction hotel with a 45,000 square foot indoor waterpark located approximately one mile from the existing casino hotel operated by the same Native American tribe in Mount Pleasant, Michigan.

In 2012, Water Zoo opened in Clinton, Oklahoma, attached to a Holiday Inn Express that opened in 2011. The indoor waterpark with a retractable roof offers more than 300,000 gallons of water, 500 feet of water slides, and various other splash features, including a wave pool, toddler section, lazy river, three water slides (including a tornado bowl), and a multilevel play structure with a 600-gallon tipping bucket.

The reopening of Maui Sands in Sandusky, Ohio, and the redevelopment of CoCo Key in Arlington Heights, Illinois, are the two largest projects projected (at 35,000 and 37,000 square feet, respectively). Sahara Sam’s, which is expanding its indoor and outdoor areas, represents one of relatively few standalone indoor waterparks in the United States. Although a number of additional indoor waterpark resorts are proposed throughout the United States, none are projected to open in 2013.

Outdoor Waterparks: The number of outdoor waterparks is growing faster than any other category, as the following tables indicate. 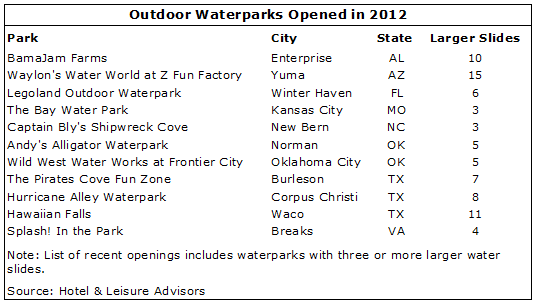 Eleven new outdoor waterparks opened in 2012 with a total of 77 larger slides. All of the private parks are located in the southern and southwestern states with three in Texas. The only municipal park on the list is The Bay Water Park in Kansas City, Missouri. The parks with the most attractions include Waylon’s Water World at Z Fun Factory in Yuma, Arizona; Hawaiian Falls in Waco, Texas; and BamaJam Farms in Enterprise, Alabama. These parks boast 15, 11, and 10 new slides, respectively.

A significant number of outdoor waterparks are expected to open in 2013 as well, as the following table shows. 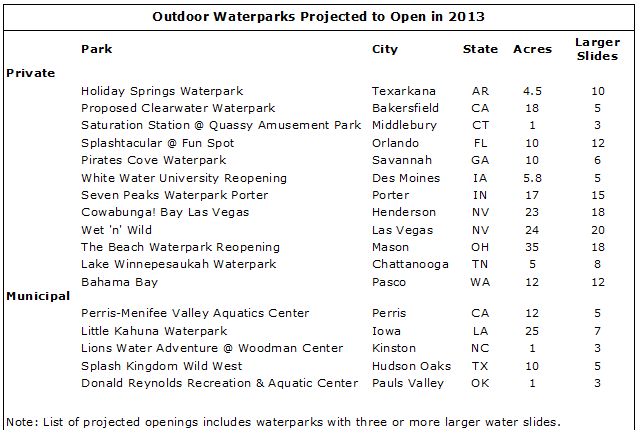 Of the 16 new outdoor waterparks projected to open in 2013, 12 are private. The number of larger slides range from three to 20, while the park sizes range from one acre to 65 acres. The largest outdoor waterpark project on the horizon is Wet ‘n’ Wild in Las Vegas. Other significant additions include the reopening of The Beach in Mason, Ohio; Cowabunga! Bay Las Vegas in Henderson, Nevada; Seven Peaks Waterpark Porter (which is a redevelopment of Splash Down Dunes) in Porter, Indiana; Bahama Bay in Pasco, Washington; and Splashtacular at Fun Spot in Orlando, Florida.

Overall, adventure seekers can look forward to 150 larger slides planned on more than 245 acres at new outdoor waterparks in 2013.

Resorts with Outdoor Waterparks: A number of resorts, particularly in the southern states, have been adding outdoor waterparks as an additional amenity and attraction for guests. The outdoor waterpark is a refreshing way to enhance the guest experience and provide more family leisure options.

The following tables represent resorts that have added outdoor waterparks in 2012 and those planned for 2013.

Two resorts plan to expand their waterparks in 2013, while Schlitterbahn is planning a multistaged project in Cedar Park, Texas, offering an outdoor waterpark with slides (including an endless water slide) and a transportainment river, which is not only a lazy river but also connects the various rides throughout the park. Eventually, the park will include a hotel, indoor waterpark with a retractable roof, riverwalk, and retail space.

Conclusion: With the increased popularity of staycations, long weekends, and family getaways and get-togethers, waterpark demand continues to grow. Waterparks have proven to be convenient and fun. Both private developers and municipalities continue to introduce new indoor and outdoor waterparks in various locations throughout the United States. However, the development of a waterpark is risky and there have been a number of well documented outdoor waterparks and indoor waterpark resorts that have sold over the past three years at prices well below development costs, including the entire CoCo Key Waterpark Resort chain. The development of an indoor or outdoor waterpark requires extensive research of supply and demand factors, demographics, income levels, potential per capita spending, potential attendance, and profitability levels.

David J. Sangree, MAI, CPA, ISHC is President of Hotel & Leisure Advisors, a national hospitality consulting firm. Mr. Sangree’s expertise is in the appraisal and analysis of hotels, resorts, indoor waterpark resorts, waterparks, amusement parks, conference centers, ski resorts, and golf courses. He has performed studies on more than 2,000 existing and proposed hotels in more than 46 states and internationally in all price ranges including economy, full-service, extended-stay, and luxury hotels and resorts including indoor waterpark resorts. He has been an active appraiser/consultant since 1987 and also has 10 years of work experience in the hotel/restaurant industry, including management positions with four Westin Hotels properties.

Mr. Sangree is a nationally recognized expert on indoor waterpark resorts and has visited most of the open waterpark properties in the United States and Canada. He has performed more than 200 studies of hotels and resorts with waterparks since 1999, and he maintains a database of statistical information concerning indoor and outdoor waterpark resorts. Mr. Sangree was named one of Aquatics International Magazine’s “Power 25” in 2008. In their profile, Aquatics International named Mr. Sangree as one of the first consultants serving the waterpark resort industry and credited him with shaping some of the latest industry trends through his expertise and experience in the waterpark resort market. Mr. Sangree has appeared on Good Morning America and CNBC on special reports concerning resorts and waterparks. He can be reached via telephone at 216-228-7000 ext. 20 or via e-mail at dsangree@hladvisors.com. The author wishes to acknowledge Hollie Gibbs for her assistance with the article.