All of this is good news for the thriving Grand Rapids hotel market. According to Experience Grand Rapids, the area’s official destination marketing organization, hotel room revenue in Kent County reached an all-time high of $216 million in 2018, marking a 2.1% increase over 2017 and the ninth consecutive year of revenue growth. Developers have plans to add more than 800 new rooms in 2019, including projects in downtown Grand Rapids and in suburban areas surrounding the city. There are many factors impacting the strong hospitality environment in Grand Rapids, including a robust and diversified economy, increasing population trends, and growing tourism.

Historically, Grand Rapids was a center for carpenters and woodworkers and became known as “America’s Furniture Capital.” Over the last few decades, however, its economy has diversified and now boasts a healthy mix of health care, professional and business services, manufacturing, and leisure industry sectors. Notably, the region has an uncommonly high share of manufacturing jobs; the metro area has seen industrial employment rebound 27.9% since 2009.

At 2.9% as of March 2019, Grand Rapid’s unemployment rate was lower than both the state (4.0%) and national averages (3.8%). And while the region’s low unemployment rate is indicative of a strong economy, it highlights another challenge facing employers: recruiting and retaining skilled workers.

Economic opportunities and an affordable cost of living index (92.7) are helping to draw more people to the region. While Detroit’s population continued to decline in 2018, U.S. Census Bureau estimates say Grand Rapids and its surrounding suburbs led much of the state’s population growth last year. With a gain of 1,135 residents, Grand Rapids grew to over 200,000 residents and its surrounding communities saw significant gains as well.

Median household income – an important consideration in forecasting the demand and potential income for commercial real estate – is forecast to rise by double digits in Grand Rapids through 2023. The following table lists median household income estimates for the city, Kent County, the West Michigan region, and the state.

While income levels in Kent County and the Grand Rapids MSA tend to be above average for Michigan, the median household income in the city of Grand Rapids is somewhat lower. As an additional point of comparison, the median household income for the United States as a whole is estimated at $58,100 for 2018. At all geographic levels, the area is projected to see healthy income growth over the next few years.

The following bullets describe recent developments that have or will influence visitation, employment, and the general economy in Grand Rapids.

Tourism is an important economic driver for the Grand Rapids area. Experience Grand Rapids attributes a large share of the area’s hotel market success to the growth of cultural events such as ArtPrize, as well as increased interest in craft beer and culinary tourism. ArtPrize, an 18-day international art competition, attracts more than 500,000 visitors to downtown Grand Rapids on a biennial basis. Launched in 2009, this event ranked as the world’s largest public art event in 2014 and 2015, according to The Art Newspaper’s annual “Big Ticket List.”

The following table shows annual visitor spending statistics for Kent County, the West Michigan Region, and the state as a whole.

In 2017, visitor spending in Kent County reached more than $1.3 billion, representing almost 40% of the regional total. In terms of growth rates, Kent County has outpaced the region and state in recent years.

In Kent County, visitors booked a record 1.8 million room nights last year, up by more than 12,000 from 2017. Occupancy has seen growth from 2013 through 2018 with only a modest decline in 2016, despite continued increases in room supply. During the same six-year period ADR improved each year. The following table shows the Grand Rapids MSA’s historical lodging performance. The Grand Rapids MSA includes 80 hotels with over 8,400 available guestrooms, according to STR.

Developers have added 1,662 rooms in Grand Rapids MSA since 2015. Another 676 rooms will be added to the market in the next year or two. The following table shows the recent and under construction supply. 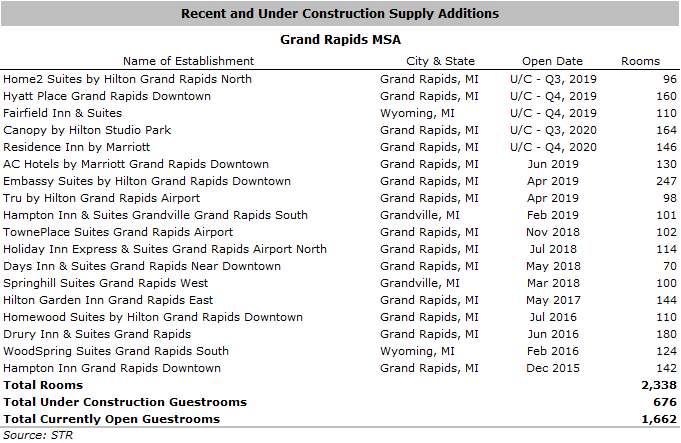 Currently, the Grand Rapids-Kent County Convention/Arena Authority (CAA) is considering a feasibility analysis of a proposed 400-room convention hotel – complete with 40,000 square feet of meeting space, a grand ballroom and other amenities – to be built atop the DeVos Place Convention Center. Backers of the publicly funded project expect it to lure an additional 45 events and 45,000 room nights to the city over a four-year period.

Grand Rapids has been riding a wave of economic growth in recent years that has helped to boost the performance of its lodging industry. The rising room revenue and additional hotel openings are evidence of the area’s strong tourism market. In 2019, the addition of new hotel rooms shouldn’t be an issue for hotel operators because demand is expected to exceed new supply levels. And while investment activity in Grand Rapids is projected to remain high in the region, developers and investors are urged to do their due diligence, including conducting a market feasibility study, before considering developing additional hotels.