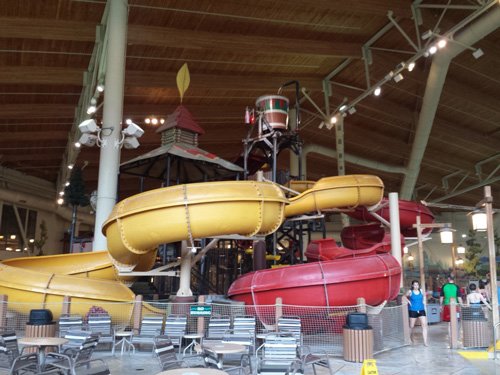 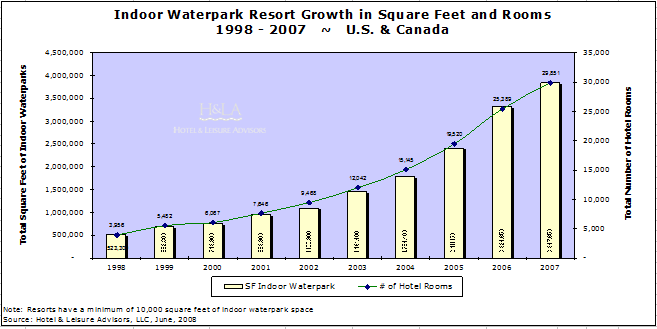 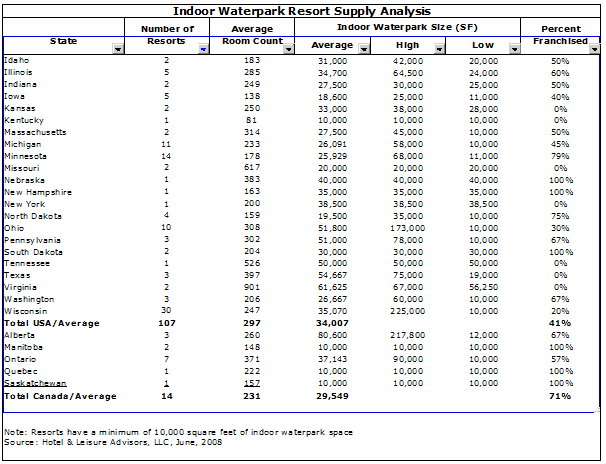 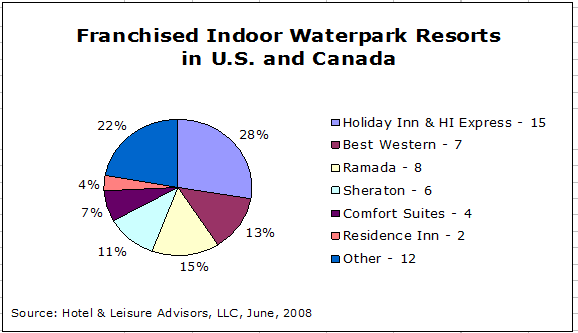 The increase in the number of guest rooms constructed has kept pace with increases in demand for indoor waterparks in most markets, although in Wisconsin, Minnesota, and Ohio oversupply issues are beginning to surface. In these states, some properties with indoor waterparks are recording lower rates of occupancy and average daily rate than they recorded in previous years due to increased competition.

The following table indicates indoor waterpark resorts which opened in 2007 in the United States and Canada. 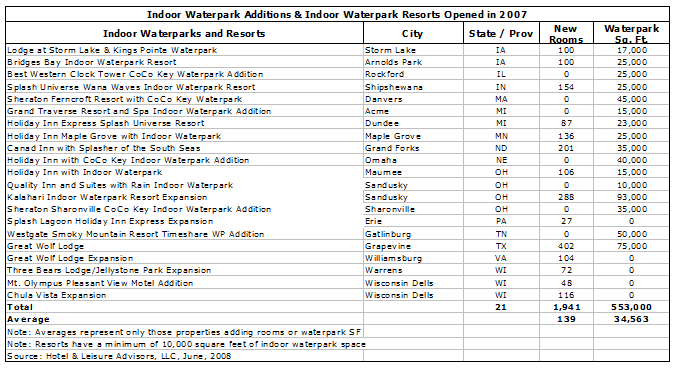 The table indicates that 21 waterparks came on line within new resorts or expansions of existing resorts in 2007. A number of properties which opened in 2007 added or expanded waterpark facilities in existing hotels. The largest indoor waterpark project to open in 2007 was the Kalahari Resort in Sandusky expansion of both the indoor waterpark and the guest room count. The Sandusky property now has the largest single structure indoor waterpark in the United States. Other large projects included the opening of the Great Wolf Lodge Grapevine, Texas, and the opening of the Canad Inn Grand Forks, North Dakota. The 2007 list includes four CoCo Key indoor waterpark facility additions to existing hotels in Rockford, Illinois; Danvers, Massachusetts; Omaha, Nebraska; and Sharonville, Ohio.

Our research indicates that there are 29 new indoor waterpark resorts or expansions to resorts which are projected to open in 2008 in the United States and Canada. The following table lists these properties. 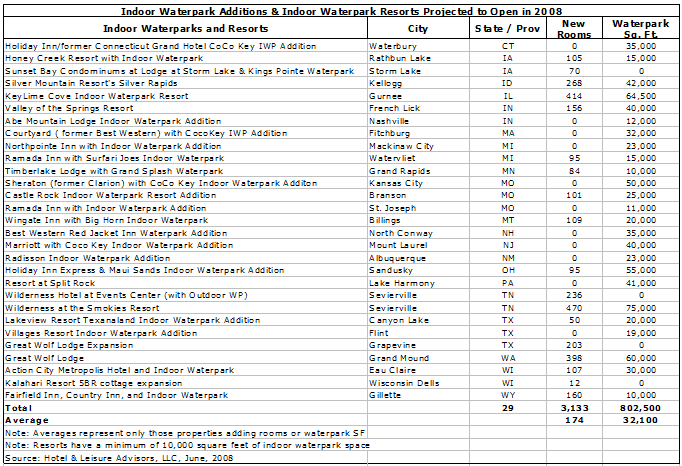 The table indicates the properties which have opened or are due to open in 2008. Of the 29 total on the list, 17 are new waterpark additions to existing hotels or room additions to existing indoor waterpark resorts. Based on the number of projects that have recently been financed or have begun construction, we project that the number of new construction indoor waterpark resorts will be similar in 2009.

The previous list includes indoor waterpark resorts known to be in the planning stages or under construction. Of this list, only those with proper planning and financing will be developed. We project a number of these projects will not be developed due to the challenging financing issues which exist in 2008.

A number of trendsetting developers are creating exciting concepts in indoor waterpark resort properties. The following bullets describe a few of these projects.

Kalahari Resort in Wisconsin Dells is constructing an 110,000 square foot family entertainment center complex which will connect to the existing 752-room Kalahari Resort which includes a 125,000 square foot indoor waterpark. The indoor dry complex will include a six-story Ferris wheel, laser tag, ropes course, a zip line, go karts, bowling, and a variety of other features. This will be the largest dry indoor entertainment complex attached to any indoor waterpark resort in North America. Kalahari Resorts has also announced plans to develop a 715-room indoor waterpark resort in Fredericksburg, Virginia, as part of the Celebrate Virginia complex. This resort will include a 200,000 square foot indoor waterpark which will become the nation’s largest indoor waterpark in one building, potentially being larger than the recently expanded Kalahari Resort in Sandusky, Ohio. This resort project has received a significant tax incentive package from the City of Fredericksburg.
Great Wolf Resorts opened the Great Wolf Lodge in Grapevine, Texas, in December, 2007 with 402 guest rooms. This facility is currently being expanded by 203 additional guest rooms and a conference center which are projected to open by year-end 2008. Earlier in 2008, Great Wolf Lodge opened a 398-room resort property in Grand Mound, Washington. The chain now offers 10 locations in the United States and Canada. They have announced plans to construct new resorts in Charlotte, North Carolina and Foxwoods, Connecticut.
The Maui Sands Resort in Sandusky, Ohio, opened in June, 2008. This conversion and expansion of a former Holiday Inn now includes 304 guest rooms and a 55,000 square foot indoor waterpark with the only Surfrider in the United States. The Surfrider allows guests to utilize real surfboards as well as body boards in riding the waves. Waveloch, the developer of the Flowrider, developed the Surfrider and sells it in coordination with Aquatic Development Group. Additional installations of both the Flowrider and Surfrider are projected at indoor waterpark resorts.
CoCo Key Waterparks have opened at six locations as of June, 2008. These include indoor waterpark additions at the Cherry Valley Lodge in Newark, Ohio; Sheraton in Arlington Heights, Illinois; Best Western Clock Tower in Rockford, Illinois; Sheraton Ferncroft in Danvers, Massachusetts; Holiday Inn in Omaha, Nebraska; and the Sheraton in Sharonville, Ohio. Additional indoor waterparks projected to open later in 2008 include the Marriott in Mount Laurel, New Jersey and the Courtyard (former Best Western) in Fitchburg, Massachusetts. These projects are being developed by Sage Hospitality, Wave Development, and their partners.
The Valley of the Springs Resort is under construction in French Lick, Indiana, and will offer a 156-room hotel with a 40,000 square foot indoor waterpark. The project aims to open by year-end 2008. The resort will pursue certification to obtain a LEED designation, and will be one of the first indoor waterpark resorts to obtain the green building rating designation. The resort will utilize specialized water filtration technology to use less chlorine and less water. The indoor waterpark will offer the largest retractable roof structure ever constructed by the manufacturer, Openaire.
Conclusion

Indoor waterpark resorts are expanding their reach as leisure destinations for families looking for a convenient weekend getaway or vacation. In the 1990s, the indoor waterpark resorts were located in the Wisconsin Dells region, but today growth continues throughout the United States. As with the amusement park industry, owners and operators of indoor waterpark resorts have discovered that in order to attract new families to their facilities and keep their repeat guests coming back for more, they need to continually work to add new components and keep the concept “fresh.” We project that the average size of indoor waterparks constructed will continue to increase as customer expectations increase. We project continued development of indoor waterpark resorts in the northern United States as they offer an attractive year-round leisure opportunity for families and attractive investment returns for developers. However, with the substantial growth in supply in the segment, we recommend thorough feasibility analysis be performed for projects to ensure that the project’s return on investment is adequate for the development.